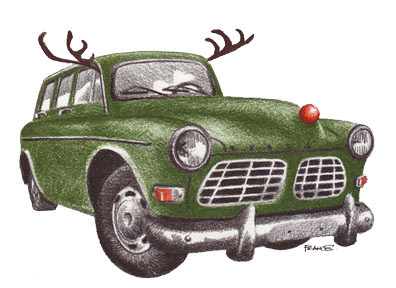 There's no doubt that stuffing a Christmas tree into a Volvo seems like the most natural thing in the world. I imagine that in the far away land known as Sweden it is some kind of national winter sport, along with it's own world records, specialists, woollie jumpers, thrash metal, icy beer and pigs heads on spikes.Today I had a go, it was the usual seasonal pantomime, the cold's now  departed and we're left with damp and dispiriting gales. You choose your 8 foot tree from a windswept B&Q bin, priced at £27.99 or thereabouts, you lug it to the robot till and in the space of 30 seconds it's jumped up in price to £47.99. You think "fuck it I need this tree" and blame your lack of glasses and curse rampant hedge fund managers and George Osborne. You certainly don't dare query the bar code and by this time you're covered in damp pine needles and have grown strangely attached to your dead wooden companion. Then the ritual of Volvo stuffing begins, the key components being: a) don't damage the precious tree, b) don't get any wetter than you are already and c) don't cover the car in pine needles (it's not a good look) and d) don't drop the tree into a puddle or under another car's wheels. In Sweden they do this in mere seconds. Here, the old Viking genes have worn off a bit and it can take a while and items a - d may well befall the intrepid tree buyer. Any way we're home safe now and the tree is outside in the rain. I know that seems kind of cruel but at some point it will enter the house and be tarted up like Lady Gaga for it's short lived festive fortnight. It's nearly Christmas, phew. Thanks to Wagonized for the Volvo drawing, I take no credit.
Posted by impossible songs at 8:21 PM
Email ThisBlogThis!Share to TwitterShare to FacebookShare to Pinterest