Euro 2008 running in the background 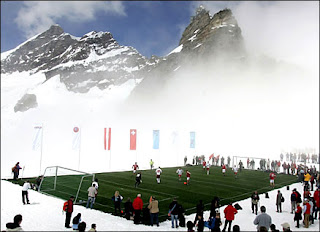 It's with a certain interested detachment that I'm watching Euro 2008. From a distance whilst doing other things and stuffing strange objects into vacant time gaps you could say (but probably wouldn't). So it's the kind of Scottish summer we've become used to, a major sporting event takes place and we have no involvement apart from office sweeps and interrupted TV schedules. The pundits are all finding it particularly hard this year and the coverage is comprehensive but wafer thin in terms of it's passion and actual content. Nobody in the BBC cares who wins as long as it's not the French or Germans and my soft spots are for Croatia and Portugal for no good reason and as yet I've still to watch more than twenty minutes straight of any match. Perhaps I need to introduce a little more beer and crisps into the equation.
Ok, its now 21.45, two packets of crisps and some lager later Holland have beaten Italy 3 - 0. It seems that some strange, dark magic from the deep mists of time is starting to take effect.
Posted by impossible songs at 7:16 PM
Email ThisBlogThis!Share to TwitterShare to FacebookShare to Pinterest