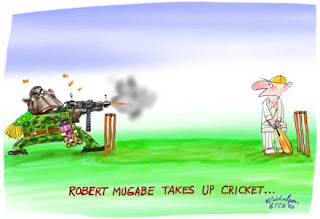 So the great white Nelson has almost spoken out against Robert Mugabe and Golden Brown is going to strip away his knight-hood (how long has that taken?). Well at least they are capable of doing something, a shame it can only be described as pathetic and about five years to late. It does make you wonder how "normal" our politicians and leaders are in terms of their judgement and ability to react. Meanwhile Robert M and his generals will hang on to the bitter end, cracking skulls, laughing at the UK and even worse than that at their own African neighbours, all of whom seem frozen, indifferent and so bottled out they can hardly say a thing. Truth has fallen (did it ever stand?).

Meanwhile I've discovered that the NHS Cafe (in a Fife hospital) has banned the sale of Coca-Cola as it contains too much sugar. However in a brilliant piece of food policing they continue to sell cakes, sweets, Irn-Bru, Pot Noodles etc. etc. There's nothing like this kind of ridiculous "healthy" posturing to destroy credibility and completely baffle patients and punters alike.

Posted by impossible songs at 10:12 PM
Email ThisBlogThis!Share to TwitterShare to FacebookShare to Pinterest