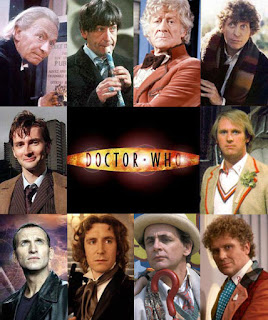 It's hard to think of a sci-fi TV franchise more patchy and troublesome than Dr Who. In the BBC's hands it's been created, deleted, ignored, developed and finally has matured into it's current mildly compulsive form and been a mega-earner for spin of products and other series. Having said that it remains on a constant pivot point between absolute crap and brilliance, maybe that is the secret of it's survival. A great idea that is both enhanced and pillaged on a weekly basis, slave to rubbish acting, BBC contract players and dodgy production values ultimately saved by now and again good scripts, modern CGI and some kind of intrinsic x-factor that holds it all together. Perhaps it's the (good) Time Lords themselves that actually maintain it as a future-proof PR stunt. The producers of Lost, Heroes and the like must look at it and think WTF.

Thanks to Sky Plus we watched Saturday's show this evening (Sunday) after a heavy curry and a few glasses of wine, this seems to have had the desired effect on the quality and credibility of the episode, roll on next week's undoubtedly spiky conclusion.
Posted by impossible songs at 7:37 PM
Email ThisBlogThis!Share to TwitterShare to FacebookShare to Pinterest