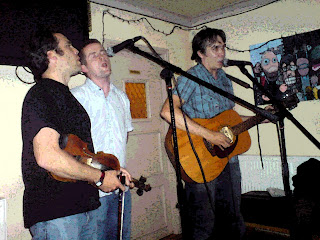 Uhersky Brod playing at the Phoenix 04/06. Scott Renton, Bruce Thomson and Paul Cumming (minus Dylan Matthews). I joined the band for the set by playing djembi badly from the edge. Some thoughtful and clever music from this eclectic trio with an uncompromising Scottish rasp and a black sense of humour. It all can be savored in a new, beautifully packaged cd called vz.61. A Skorpion vz.61 is the locally built small arms weapon produced in the town of Uhersky Brod which forms the subject matter for a song written and performed by "the Brods". My own favourite "Nae Drama" ended the set. When will we see their like again? Underground and unsigned: There is a huge raft of talented, careful and careless writers and performers out there, playing, performing and getting on with life whilst the wider world focuses on the trite and manufactured music that makes the media moguls rich. This unfocused but real band of musicians form an informal community that keeps some age old dream alive, writing about what they see and how they live - not a bad thing to be a small part of. The role call present last night included: Impossible Songs, CBQ, Tommy Mackay, James Jamieson, Nyk Stoddart, Fi Thom, Darren Thornberry, Ian Sclater, the Beggar Girls, Peter Micheal Rowan, Dave O'Hara and Jim Igoe. (I may have missed a few but...)
Posted by impossible songs at 8:17 AM
Email ThisBlogThis!Share to TwitterShare to FacebookShare to Pinterest