Kryptonite and stars and cowboy boots 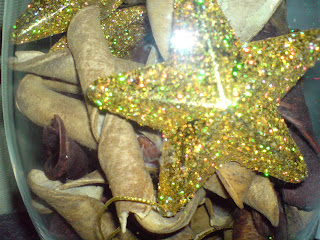 The celebrations are well underway, our pet starfish has been candy appled (as in apple the fruit) and metal flaked into Christmas and our best piece of green Kryptonite has new sparkly neighbours to join him by his seat of wisdom and solitude. Soon chestnuts will be roasting on the open fire etc. etc. 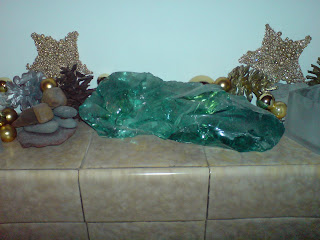 Today I ventured out into the shops, the idea being that I would buy a series of items that I had carefully listed about five minutes before I left the house. These items were all destined to be Christmas gifts for loads of people. Sure enough when I reached the shops stuff was everywhere (apart from Woolworth's, a shadow of it's former self and now looking more like down town West Beirut did in the 70s), so I had to start choosing things to buy. This didn't really take long as most things were available, all shiny and bright today, all new and desirable, glittering prizes to be stored under the transplanted tree until we can take the suspense no more and rip them to shreds.

I was taken by a sprightly old guy at one of the check outs, joking about being under 25 as he bought his wine in Livingstone's Walmart. He was old from the top of his head to his knees. Below the knee however he was young enough to be wearing silly cowboy boots like Bono or John Wayne - good for him, I want a pair.

Bankers eh? What are they like? Back in a previous life I endured long training sessions being taught about Materials Requirement Planning (MRPII) and when it came to inventory management (and you don't really want inventory but real life tells you need some) the banks were the boys we looked up to. Normal organisations just kept losing inventory (trucks, heavy metal, spare parts, pallets), it just drifted away, but this never happened with banks. They had the best storage and inventory control systems going because nobody ever lost track of money, while the dumbo dinosaur manufacturing industry just couldn't keep track of all their washers, springs and bolts. Well that was back in the 80s, seems that things are different now, we've no manufacturing left (MRP II too late!) and now it's the turn of the hedge funds and the banks that fuel them to have trouble getting the numbers to add up. Somehow another 50 Billion just sneaked away while they were sipping on cocktails and listening to Elton John. Bugger the lot, bring back MRP II, proper compliance checks and some decent stock visibility and control.
Posted by impossible songs at 5:22 PM
Email ThisBlogThis!Share to TwitterShare to FacebookShare to Pinterest