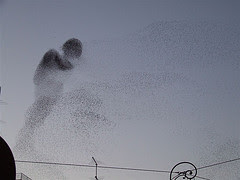 Today I've managed to avoid going to Rome and getting mixed up with the five million starlings that have descended upon the Eternal City. They've also ascended above the city and with unmeasured abandon and little thought as to the overall effect, busy themselves creating their artworks in the winter skies. In so doing they infuriate the locals by their roosting, avoid the harsh weather further north and delight tourists and people with fancy cameras and Flikr accounts. 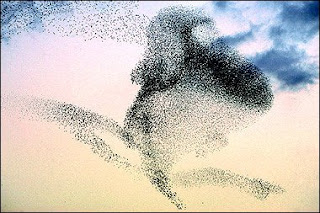 Today it is cold, cars are iced up, noses run and the only good thing to eat and beat the chill is a hot Pukka pie - which I did. I would've made soup but that seems too complicated and the vegetables are still firmly rooted in the shops. I will now retire to the lounge where the ironing, the fire, Ali on the couch and the glow of the TV are already beckoning in a weary, warming way. 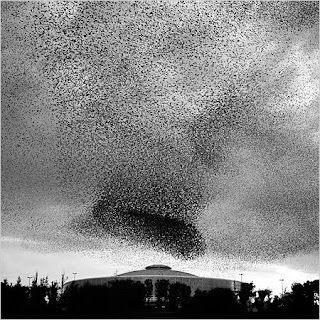 At least I've started the annual ritual procurement exercise in true homage to those three seasonal wise men, Dickens, Nicholas and Coca-Cola and started my Christmas shopping at Amazon, the lazy man's answer to retail blues. A simple list of things that people don't really need but have to have is quickly translated into a string of irritating emails and two pages on a credit card statement that not only sets fire to the carpet when it plops through the letter box but lasts until June. Joy to the world and MasterCard. I'm sure none of this was quite what God, Jesus and the other angelic folks in the arithmetically challenged trinity had in mind 2008 years ago when this snowball began to roll but DHL, the Post Office and numerous white van firms are still rejoicing in the Christmas Chaos. Next is the tree erection episode and the Brussels sprout peeling contest.
Posted by impossible songs at 7:33 PM
Email ThisBlogThis!Share to TwitterShare to FacebookShare to Pinterest