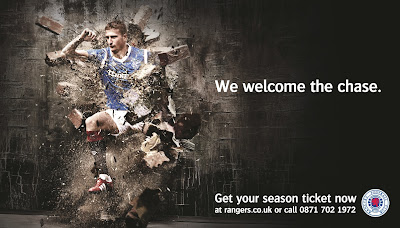 The only chase that Rangers would welcome right now are Chase Manhattan, assuming of course the bank were prepared to stump up £75m to clear the team's accounts. It wont happen however. Rangers have reached too far over too long a period of time, been sold for £1 to an asset stripper and are headed for err...survival I guess. The humiliation will pass, there will be a struggle but they'll return and probably try to employ the same business model that has just torpedoed them. Lessons generally don't get learned that well anywhere in Scotland, we're not that type of nation, and it's hard to feel sorry for those same fans that have crowed over their golden years and abused and belittled all the "lesser" teams who ultimately fell in their overpaid and unaccounted for wake. Dunfermline Athletic are now £80k down following last week's drubbing from this crooked outfit. Will we ever see that money? Not likely. I'm just glad that I've put little or no cash their way for about twenty years, Hell and handcarts spring to mind (and no more blogging about this, I'll move onto cars and music any day now), speaking of which...I now own a car with a CD player and a cassette player. All the long undead music can be played; Steely Dan, the Gin Blossoms...mmm.
Posted by impossible songs at 6:36 PM
Email ThisBlogThis!Share to TwitterShare to FacebookShare to Pinterest