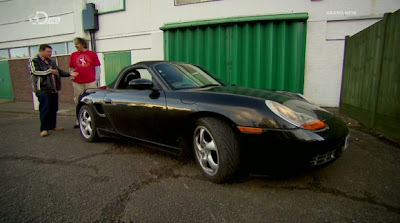 A busy night of ironing and bird feeder filling led me eventually to watch the latest Wheeler Dealers' Boxster S episode. It's already generating comment and gathering shit on various petrolhead forums and as I've got a keen interest in this affordable but problematical Porsche (?) it had to be worth a gander. The first deal, buying it for £1000 took some believing even with a dodgy Tiptronic gearbox; what was the owner thinking? Presumably nothing more than "I'll be on be telly looking a complete dickhead selling my Porsche for a grand". The car hadn't run properly for four years but took off like a rocket on a single key turn and sounded sweet as a nut except from the clunky gear change and some worn brakes. Never. Of course the faulty gearbox only needed a £200 oil and filter change and lo and behold it ran again like a Swiss watch straight from the German factory. Next the seats got  recovered and the brake discs skimmed (while on the car) using a five grand special tool (don't try this at home). The biggest job was honking off the two cats and cementing on a stainless steel exhaust. Meanwhile nobody, well perhaps Ed China off camera, seemed to look at the engine at all. A tough omission to believe and that was the one bit I really wanted to see opened up. Unbelievable. Then some shifty bald bloke (looking a bit like me) handed over £5400 cash and drove away with the most strangely restored high miler motor I've seen yet. The worn out seats suggested 100k anyway. View more photos here if you're a tyre kicker of any kind. TV format? Getting tired I'm afraid.
Posted by impossible songs at 9:15 PM
Email ThisBlogThis!Share to TwitterShare to FacebookShare to Pinterest