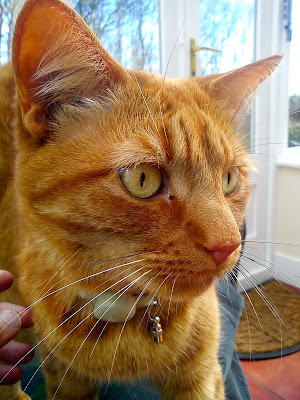 I don't really understand much about inter-cat relationships but they appear to be complex and full of pointless territorial moves. It's all a daft puzzle to the innocent human. Our two now seem to have been accepted into the local cat society but there still is feline friction of sorts, on most days. This boils down to:

a) Standing off - keeping a safe distance and scowling at the other cat like a cross OAP.
b) Being oblivious - that is until some space invader tipping point is reached.
c) Howling - usually a low, plaintive moan where the cat sounds genuinely disturbed.
d) Snarling - not a proper snarl really, more of an angry meow.
e) Spitting - again pretty feeble with not much spit ever coming out.
f) Sitting in the place where the other cat just peed or pooped, no idea what this is about.
g) Running madly for the home cat flap - when items a - f have run their course.

Lastly there is showing off. The cat next door jumped up into a tree to attack two Wood Pigeons innocently procreating.  Our two looked fairly puzzled by this and were I suppose pretty much intimidated by the show of speed and aggression. The pigeons didn't mind much and resumed their activity on a higher branch on another tree. No animals were injured etc. etc.
Posted by impossible songs at 5:33 PM
Email ThisBlogThis!Share to TwitterShare to FacebookShare to Pinterest