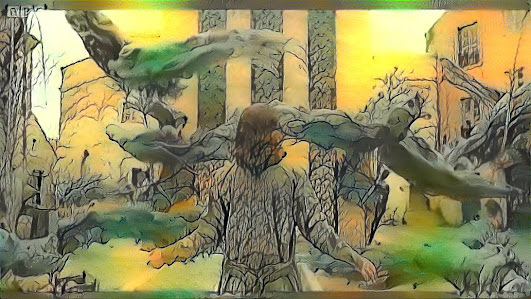 Children running about looking angry and confused, one has a knife but no idea what to do with it. The heroic girl is baffled. You know they're just going to run around aimlessly in a repetitive film set for most of this episode. The boy with the knife isn't feeling too good.

A man in a balloon reacts slowly to having a practicing Shaman on board and assumes the laws of conventional physics still apply to his trip.

Priests talk very slowly and deliberately then frown and use the word heretic like it was some kind of unexploded bomb buried in the crotch of their cassocks. They are in a state of perpetual outrage.

Grumpy woman arrives in a strange world wearing unusually practical clothes, encounters ghostly CGI monsters and scares them away, purely by using the strength of her mind and her determination. Her pet monkey does not seem to be fully aware of her intentions and is surprised at her show of force.

A roving Irish woman hands out drugs to innocent kids.

Meanwhile in the mountains, wooden witches act as if they were in some early Dr Who episode where every badly written line requires an excruciating level of over acting in order for it to be delivered. They perform a healing ritual before being attacked by some more CGI monsters.

The grumpy woman casually downs two bottles of wine, crushes a snake and kills the man who insulted her.

The evil grey airships attack the balloon but the Shaman summons up thunderstorms and crows to down them. They plummet down in flames. Hundreds may be dead in the disaster, nobody is sure. The balloon may well crash land.

The end titles run. Well that was actually quite good.

Posted by impossible songs at 8:06 AM
Email ThisBlogThis!Share to TwitterShare to FacebookShare to Pinterest