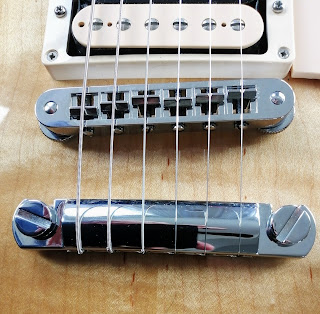 So after only 40+ years of playing Les Paul (type) guitars, why have I only stumbled upon "top wrap" now? Idly watching YouTube I came across what was described as a "controversial secret" that's been argued about on forums and in venues and studios since god knows when. News to me but then I don't get out much. It seems there's a healthy body of professional opinion that says wrapping the strings round and over on a Gibson type bridge improves tone, sustain and tuning. Well I never. Naturally I tried it yesterday morning, adding a fresh set of strings and a bit of cleaning up in the process. Does it make difference? Well a day in it's hard to be sure but it may well be a change for the better.
P.S.Gibson's own promotional materials seem to show their bridges being used both ways so it's really whatever you think and are comfortable with. Another hack I happened upon came up on YouTube a few minutes after top wrap concerns keeping unwound strings in tune on a Gibson  3 x 3 style neck. To solve the numerous tuning issues (and all other non-straight pull string configurations guitars have), wind the string from middle to top (not middle to bottom) when tightening and tuning. This will cure all those ongoing issues you probably have with unwound Gs, notoriously the most awkward bastards of the string community. Does it work? Sounding OK so far, and excuse the illustrated untidy string winds. 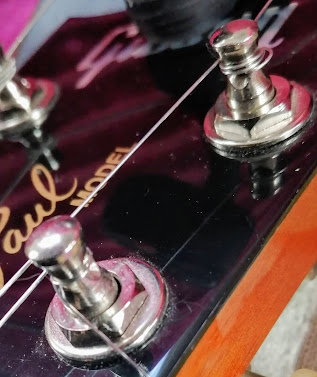 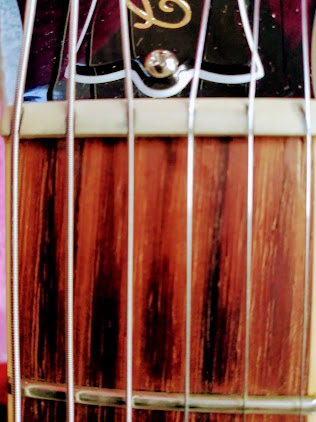 Final tip (and one I've known for ages) a small shot of lead pencil graphite on the nut and bridge rollers (or pieces) can help lubricate and steady the strings and also preserve tuning and create a little less wear and tear (ping!).

Posted by impossible songs at 8:18 AM
Email ThisBlogThis!Share to TwitterShare to FacebookShare to Pinterest