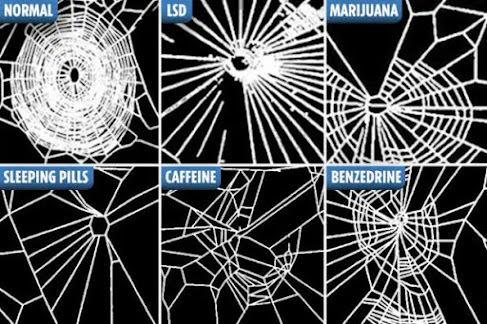 Allegedly scientists from NASA gave spiders drugs and recorded and measured the outcome of the exercise by comparing the webs they had spun. I'll leave you to your own conclusions.

A similar study was carried out on a selection of fifth year pupils at Dunfermline High School in 1971, the full results were never published but I understand that Skol lager and water chestnuts did quite well.

The "Spiders on Drugs" came very close to being David Bowie's backing band about the same time. Not sure what became of them.

Posted by impossible songs at 8:13 AM
Email ThisBlogThis!Share to TwitterShare to FacebookShare to Pinterest