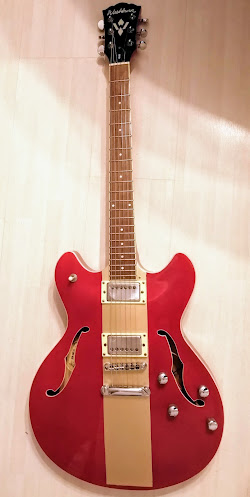 Per the previous post, I was idly indulging in some eBay browsing when I came upon this rather unloved and strangely painted Washburn HB 30. Advertised as being 30 years old, unloved and being "sold for a friend". Not a great looker but I fancied a hollow body guitar. There were a few low bids, all well under the value of the guitar so despite my inner voice's better judgement I bid £2 higher than the previous bit. The auction still had three days to go and I fully expected the guitar to sell for at least £150 more than my bid. Oddly enough there was no more activity and my bid won and I duly received the guitar last week.

The guitar turned out to be decent enough, nice action, no major damage, things working and I was pleased with the purchase. The only problem was the horrid and badly painted gold stripe of the front and a load more gold paint on the back, (which was roughly trying to ape the Washburn head stock design). It all had to go. I stripped the guitar down, taped up all the delicate bits and using a combination of WD40, white spirit and paint remover I began to work on eradicating the gold paint. I had the idea of making an old credit card into a soft scraping tool and with a lot of elbow grease the gold eventually came away without too much damage done to the actual cherry body finish (as below). 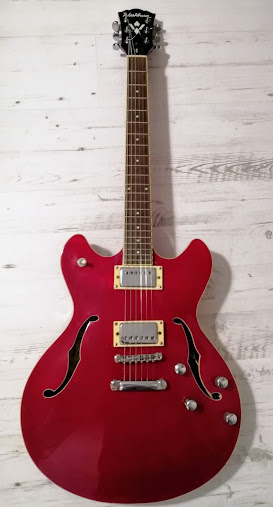 Posted by impossible songs at 9:59 AM
Email ThisBlogThis!Share to TwitterShare to FacebookShare to Pinterest