Some things about St Michael's sacred line and the seven sites:

"An impressive and mysterious straight line, which runs from Ireland to Israel, uniting seven monasteries and sanctuaries related to the Archangel Michael."
Is it mere coincidence? Was it intentional? The seven shrines stand at great distances from each other, but are perfectly aligned (?).

The "Sacred Line of St. Michael the Archangel" symbolizes, according to tradition, the sword blow that the Archangel inflicted upon the devil to send him to hell after the battle in the heavens between faithful angels and rebellious angels who, led by Lucifer, they had turned against God.

Be that as it may, it is surprising the arrangement of all these sanctuaries along a straight line. Is it a warning from the Archangel that, in keeping with the laws of God, the faithful always walk in righteousness ? The Sacred Line, moreover, is perfectly aligned with the sunset on the day of the summer solstice in the Northern Hemisphere.
The only problem with this theory/fairy-tale is that the "straight" line isn't straight. It's wobbly here and there. Look at the bend it takes between Greece and Israel. I'm not seeing a miracle, possibly a series of odd coincidences in choosing building sites over the centuries. 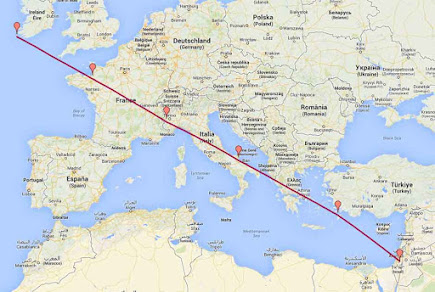 The northernmost end of the line is on Skellig Michael (Ireland) where, apart from the various Viking and Christian events that took place there, Luke Skywalker is known to have had a retirement home, for a short time anyway.
The second site (St Michael's Mount in Cornwall) isn't shown on the map as for some reason it skips it and heads straight to Mont-Saint-Michel in France.
The other locations are: Sacra di San Michele (Turin, Italy), Sanctuary of Monte Sant’Angelo (Mount Gargano, Italy), Symi Monastery Greece and Stella Maris Monastery (Haifa, Israel).
So now you know.
Posted by impossible songs at 8:33 AM
Email ThisBlogThis!Share to TwitterShare to FacebookShare to Pinterest