Funeral for a fridge 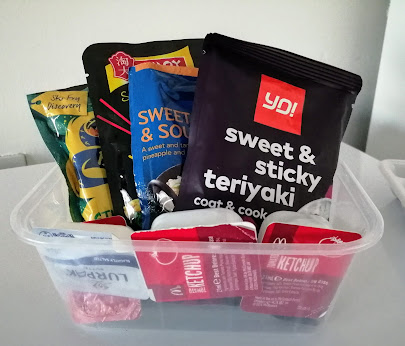 The funeral for the fridge has yet to take place but it's passing has been a slow, sad, downhill process. At times we suspected there might be a recovery. Cold air wafted across the shelves, the fan whirred and optimistic ice formed. Drinks and spreads remained comfortably chilly, albeit some assistance in the form of icy freezer blocks was regularly required. As it happened it gave up the ghost on Saturday, slowly warming up, in line with the great thaw taking place outside in the wider world. Water, like a clear life blood, ran from the foot of the door. Nothing smells more death like than a broken down fridge.
Gingerly things were removed and examined, some sent to the other freezer, some to the tiny drinks fridge, some to the front door vestibule (known to be the coldest spot in the house) and some consigned to the bin (with difficulty). A few luckier items were eaten as it happened, by being turned into "emergency" soup. These items mostly took the form of some kind of broccoli. Now it's midweek and the soup has been consumed. It's all over. We mourn and we must move on.

The assorted saucy sachets seen in the photograph above are refugees from the sunken fridge, why they were ever put in there nobody knows. Now they are homeless. Spare a thought for them.

Posted by impossible songs at 8:37 AM
Email ThisBlogThis!Share to TwitterShare to FacebookShare to Pinterest