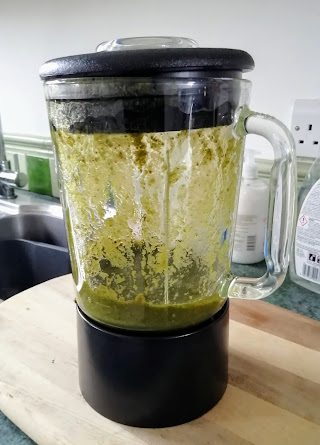 Last week we broke the blender. Some over enthusiastic smoothie processing caused catastrophic failure of a small but frangible internal part. Once again my cursed but blessed friend Mr eBay came to the rescue as I discovered the part was available for our exact (somewhat vintage) model. £7.50 and two days later it arrived in the familiar Chinese packaging though not direct from China. Thank you UK box-shifters.

After the customary fiddling and swearing the new part was installed and to my surprise it all worked once again. The end result being this green porridge-like smoothie made from kale, mango, kiwi, banana and orange juice. This unplanned recipe was of course the result of an unplanned catastrophic freezer failure; one unlikely to be repaired via Mr eBay's good grace and supply chain either. We just need to stop having catastrophic failures, simple as that.

Posted by impossible songs at 8:58 AM
Email ThisBlogThis!Share to TwitterShare to FacebookShare to Pinterest