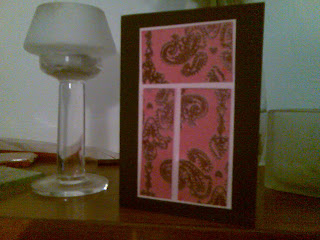 My daughter's wedding invitation has arrived and takes pride of place on the mantlepiece, roll on September. 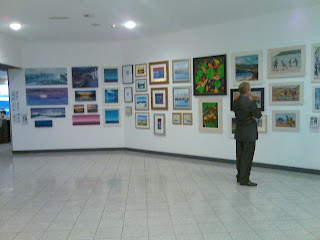 Art in the airport, you may say "what's the point?", you may walk past and ignore it, this guy is the first I've ever seen stop and take a look - it's not me by the way.
impossible songs

impossible songs
Back to black

Thursday evening, home again after an 18 hour day of travelling and discussing and sitting in traffic jams on the M40/42 and delayed Flybe flights. A chicken Cesar salad and a cool bottle of Peroni in Birmingham airport’s Frankie and Bennies’ did little to soothe or relax me but such is life. I am determined to remain an optimist and to be a positive influence in this cruel and negative world where the status and effect of traffic dominates our behaviours in a completely unreasonable way. I’m also going to get a flight case for my guitar pedals and a tent but not for the pedals.

The last day and frontier.

My final day in the office I’ve worked in for the past five years was today - Friday. There seemed to be endless job related things to do, today of all days and despite speeches and a very pleasant farewell presentation my head remained down as I worked right up to the bell. Strangely enough our song “I miss that boy” was playing on an office PC during the ceremony, which was a reasonable enough hoot. In fact everyone had just about gone home when I finally finished up but I felt I had nicely closed everything off and I was leaving a clean sheet. Relief, a bottle of wine, a bottle of whisky, eight Boosts and other nice gifts sealed the afternoon.

On the way home I bought some fishcakes with spicy tomato sauce for Ali’s tea. I duly got back and deposited them in the fridge along with a few other things then the cat decided to be sick twice on the kitchen floor while the rain poured down outside. We mused about the purpose freezers, often things are bought that for some reason you don’t quite fancy so you stick them in the freezer. This immediately renders them doubly unfanciable and even more inaccessible, buried within a block of ice never to be thawed out and eaten. The fishcakes turned out to be the exactly what Ali fancied and I struck up a relationship with some Old Speckled Hen. Friday.

So having drunk an normal amount of Friday evening alcohol we naturally progressed onto remaking all of the beds in the house (two doubles and four singles), mercifully ignoring the downstairs futon. This confused and uncoordinated act took about an hour and involved unmaking numerous beds, trying to locate replacement sets of sheets etc. and washing and drying the used bed linen. Many piles were created and subsequently abandoned. At times comedic but generally more exhausting than anything I would not recommend this as a late evening activity. A further category of piles of things was created when we decided that some fatigued pillows and linen should be reserved for the kittens. Phew.

Posted by impossible songs at 10:10 PM
Email ThisBlogThis!Share to TwitterShare to FacebookShare to Pinterest