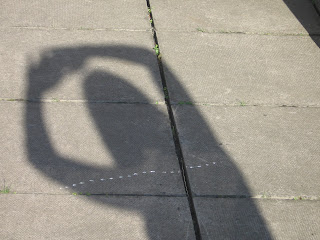 Piper at the gates...

Another frog/toad in the kitchen, so what do you do? Leave the door open and let him make his own mind up about where he goes and hope you don’t tread on the poor fellow during the night. I’m sure that good old Pan will look down and look after him come sunset. Hark! A distant flute...

Modern life is not really rubbish after all.

Lawnmowers are the modern beasts of burden today replacing donkeys, trolls, virgins, pheasants, peasants, village idiots and the like. A good lawnmower is one that’ll cut damp grass, is self propelled, doesn’t use up oil and runs for a year from the same tank of petrol. Incredibly this is just the one we’ve got, complete with the engine from and old Spitfire and the propeller from a Sopwith Camel, long may you run etc. The operator requires two bottles of beer per section of lawn and a good glass of red wine for the weedy bits and strimming the bloody nettles that are everywhere right now. Of course the operation of heavy machinery and the drinking of alcohol is not recommended by the management and particularly not during thunderstorms.

Smudge Yoda Graham will be joined by Clint “Hawkeye” Barclay some time in August. Syrus (no odd middle name or surname allocated) will require a serious amount of counselling in order to cope with this change. To make matters worse another sibling (the creamy Irish Liquor named and coloured) Baillie will join us for a brief holiday in the country also. I can feel the sneezes building already.

52 years into this life I have discovered the magic and mystery that is shredded wheat. Generally it could be described as an eating experience like sucking milky string, anyway it has now become part of my morning ritual thanks to the usual end of aisle offer thing in Tesco; it may even have been only £1.00 a box. Anything that is £1.00 always attracts my attention even if it is only worth 50p or is complete crap. The shopping experience for me always produces the unexpected and my metabolism is now reacting to a daily dose of wheat that it does not particularly like, but do I care?

I miss France, I'll not be going there this year and I wish I hadn’t accidentally watched a programme about the history of Paris on BBC2. Now I want to go back, just to sit around outside some where and drink coffee with grainy particles in it while wearing sunglasses and day dreaming. This year I’ll have to settle for the High Street in South Queensferry, Aberdeen and Alton Towers. The day dreaming will however carry on.
Posted by impossible songs at 10:43 PM
Email ThisBlogThis!Share to TwitterShare to FacebookShare to Pinterest