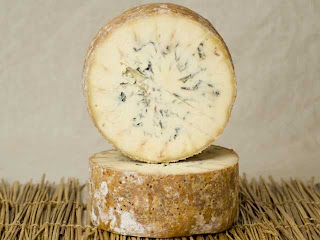 How different the world would been had Aldous Huxley laid off the Californian mescaline and just gone straight for the Stilton. The (disappointingly thin and weedy) Doors of Perception and Heaven and Hell would have had more volumes than a Song of Ice and Fire and a generation to hairy twerps would have found cheese based drugs instead of the other less tasty South American kinds. Dairy farmers would be millionaires (and therefore no longer dairy farmers) so itinerant townies would have moved in and made poorer quality Stilton for the masses and the Poundland dump bins. A sharp, short, badly economic crisis would then follow and the rest as they say is a bad Monday headline in the Sun. Whatever the outcome dreams would have been sweeter, more colourful and even more brighter and bizarre. Such is the power of the Big S, Stilton to you sir

I scored a mighty, reduced price, ex-Christmas slab at an out of town supermarket the other day, it was 50p and about to expire according to the many health warnings on the label, I paid no heed to this however. A third of it has now gone and funnily enough so have about a third of my brain cells, but oh! how we laughed. Even today's stupid news stories about the SNP failing to see that independence might actually affect other neighbouring  countries and the Tory Cabinet touring the future Olympic slums almost made sense to me. Such is the power of cheese when applied straight and undiluted to the forehead. Last night was just a blur apart from an appearance of Sherlock Holmes' smarter brother and a wee glass of Port that was floating about six inches in front of my eye line. Luckily I was found fit to drive today but was then marked down as completely unfit for shoplifting. Bugger that, I'll just grate a little more cheese then. To sleep, perchance to travel in time and get locked in a shower.
Posted by impossible songs at 9:57 PM
Email ThisBlogThis!Share to TwitterShare to FacebookShare to Pinterest