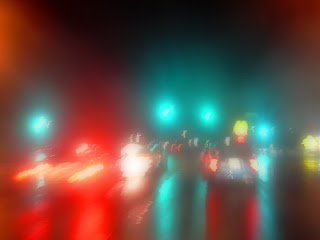 First and foremost I'm pleased and proud to announce the arrival of a new grandson, taking the grandson count up to four whilst the granddaughter count remains at two. On hearing of the new birth I dithered for a few precious seconds waiting on some primal kick in the consciousness, sure enough it came along and with only a petrol station Mars Bar to fuel me and half a tank of North Sea gas in the car I headed due north. The weather was closing in, it seemed to be raining inside the car and I quickly recognised that my decision making powers had been weakened, compromised and exposed in all their frail beauty. This was obvious from my failure to negotiate two familiar roundabouts accurately, the dark January world was become a panicky blur. Emotions were running and I was driving in the opposite direction to them, badly. Mind and body are week and feeble at times but the secret sugar ingredients in that rare Mars Bar had magical hungry properties. Once these were released upon me like some  silver anointing I was high and free once again. The road became visibly wider, the rain translucent and the car sang the sad sweet song of youth as if was 5ker instead of the geriatric racehorse I've allowed it to become. The miles and weather merged and sooner than now I was in a warm hospital holding a warm baby. A nice welcome to a new member of the family. There probably is no better feeling in the world.
Posted by impossible songs at 8:37 AM
Email ThisBlogThis!Share to TwitterShare to FacebookShare to Pinterest