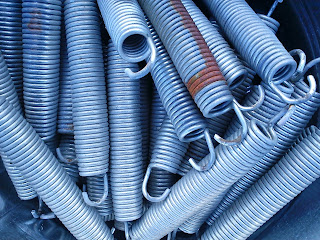 Springs: Following a rigorous health and safety audit and technical inspection our faithful trampoline was found to be wanting in a number of departments. A prohibition notice was duly issued and all jumping, frolicking and laughter ceased, who are we to argue against the mighty power of the H&S Gods? Luckily a benefactor and sponsor has stepped in so saving and preserving our families valiant efforts to get fit for the soon to be everywhere on the telly Olympic and Commonwealth Games. Planning permission has been sought and approved and work should be started on a new trampoline once the final project plan is completed and mind-mapped. This morning the old and offending Trampy was taken down by a team of sub-contracted expert midgets who had just finished a really tough shift on the Forth Bridge. Most friction free parts will of course be recycled as part of the Edinburgh Trampoline and Panda Mating Survival Initiative (Pandamating should really be one word) and so will live on in perpetuity. The photo shows a bucket of recovered springs, all in great nick and ready to bounce again one fine day.

Rings: In an unrelated incident I managed to drop my wedding ring into a giant brown bin of last years leaves, Doh! A lengthy bin search followed which was dirty but pleasantly successful. A valuable lesson in life has now been learned.
Posted by impossible songs at 5:31 PM
Email ThisBlogThis!Share to TwitterShare to FacebookShare to Pinterest