Gauge against the machine

Who wouldn't get excited about finding out which ancient Greek statue you might resemble? Well a museum in Montreal has solved that for us all; simply upload and unsmiling likeness and they'll pair you with your Greek (Geek?) doppelganger forebear.  I didn't fare as well as I'd have liked, I scored with an anonymous male philosopher then turned up as Aphrodite and then Ahata. I suspect there's a random aspect to this that pulls up and matches anybody with a nose, two eyes and a mouth to any statue or bust that has the same. There may be quite a few of them out there in the museum archives. Secretly I am of course chuffed, there's something of a ego boost that I'm taking from my obvious resemblance to a Greek goddess? 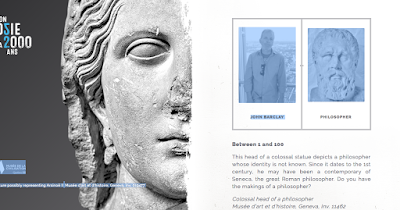 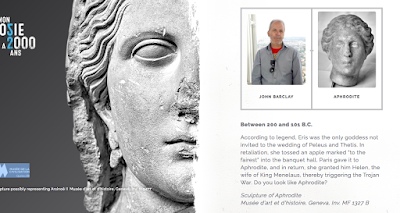 Sage/Age/Gauge/Veg Against the Machine: Reflections on the BBC6 Music festival, old (indie) folks day out as it turns out, did it live up to the hype? I've no idea, but I do like the idea:

1. Very good coverage, sound and length of set. Just what iPlayer was built for because I obviously wisnae there but enjoyed it as a radio/TV experience for a Sunday's background music. I had other stuff to do.

2. Sleaford Mods: Your drunk uncles ranting at a party. Clever and all that but it's just beats, brawn and pub banter really and I struggle to make out the (obviously meaningful, socially scathing) lyrics.

4. Jesus and Mary Chain: I had hoped they'd aged a little better, turns out they haven't. Now looking like a bunch of grumpy social workers leaving Wotherspoons having enjoyed a £5 pint and burger combo. Now they're not so sure what to do with the rest of the evening, game of darts maybe or hit the slots? Not much threat or menace there then, not much of anything.

5. Sparks: Marvellous stuff from a 69 and 71 year old. Ron and Russ are a pair of troopers. Energy and weird enthusiasm as well as a pretty decent celebrity pickup band behind them. Top stuff.

7. Goldfrapp: Well she can really sing and the combination of synths and bass and drums  works well and comes to life with her soaring vocals. That and a real depth and variation in material all the way from the back  catalogue to the new album. Her red booted caped outfit wasn't the best choice however.

8. Shins: OK: Never was into them apart from the song featured in "Garden State", that all seems like long time ago.

9. Warpaint: Another Fender love in but I quite liked them, have heard of them but haven't really heard them. Different for girls you might say.

10. Around about Grandaddy the interweb stalled to the point where it slowed down to the annoying revolving buffering symbol and a fish supper tea arrived - events not connected. The viewing pattern effectively broke. I may catch up again later in the week or at some new point in my life. 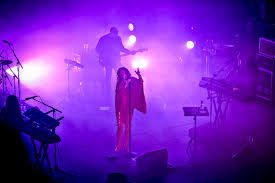 Posted by impossible songs at 7:39 AM
Email ThisBlogThis!Share to TwitterShare to FacebookShare to Pinterest