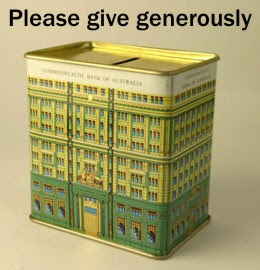 When I was a small child banks were all dull, dusty, dark wood and as uncomfortable as libraries. People whispered, money was passed across the polished counter high above my head and then secreted away like a strange drug or a bad and unspeakable family member to the sound of scratching pens and safe doors thumping shut. Going to the bank was an event in itself and, as far as I could understand something to be slightly fearful of, don't go there without good reason or you'll be in trouble was the unsaid message. Accounts were managed using leathery passbooks in blue and gold full of handwritten figures describing Pounds, Shillings and Pence and only the rich and business men or lawyers used cheques instead of real money.

Then it changed and it turned out that these banks are suddenly run by traders and salesmen thinly disguised as cartoon best friends to manage your life, insurances, money and investments. They look at products and market shares and shifting lumps of cash and credit as if they were airliners lost on a Pushing Tin radar screen or burgers sizzling on a hot plate and about to burn. They produce ugly, noisy and expensive advertisements and try to convince you that their meagre percentages and supposedly low charges are good lifestyle choices that will improve your lot and allow you to sleep soundly at night. You will be safe and happy in their greasy hands. Now the bottom has fallen out, the greed and the unsustainable hard sell have caught up and a black hole has opened up in front to end their progress. It's hard to feel sorry for the die-hard bankers, in my view they've squandered a privileged position and in a few short years turned something respectable and solid into a cheap poker game with no winners. 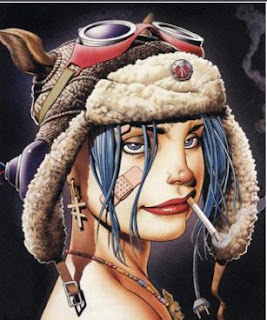 Tank Girl thanks you for looking in and hopes for a return to fame following a bad film and long spell in undeserved comic strip obscurity, such is the fate of one with a fickle public following and fan base.
Things the cats killed today and brought to the back door: Two mice, one finch and a rather large white egg (now presumed dead) from an unknown source.
Posted by impossible songs at 9:58 PM
Email ThisBlogThis!Share to TwitterShare to FacebookShare to Pinterest