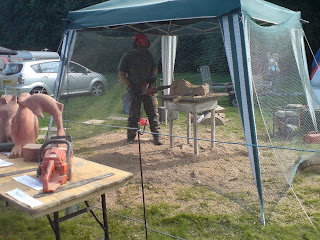 A man makes curious shapes from timber and cookie dough with the aid of (what appears to be) either a chainsaw, a tiny guitar, or a Steely Dan III (? read your William Burroughs) and a partly finished tent.
The weekend was spent for the most part in child friendly pursuits. With three small grandsons on a reckless sleepover and ready for fun it was never going to be dull. Mainly we travelled around the garden via wheelbarrow express, shopped for school shoes in Livingstone, watched and played various kinds of football and stumbled in and into the mud at the Hopetoun Game Fair. I had a great time.

Livingstone is a disturbing place, many people there are still habitually wearing white shell suits and unattractive scowls, they drink large amounts of fizzy liquid and walk with no apparent purpose from retail outlet to retail outlet, passing various building sites and baker's shops in the process. These building sites make the promise of eventually providing more spaces for this mindless wandering and sneering. It may be that in these vast halls of modern learning, the discussions and expressions of deep and profound thoughts will be shared with fellow scholars over the crowded mobile phone networks. Once the works are finished I'm sure it will be an excellent place to dawdle and ponder, as might have been said of parts of Spain at one time.

The people at the Game Fair are a different breed from the "townies" of Livingstone's wide open spaces, few daring to sport Chav fashion or Kappa joggers here. Green was the colour theme as people tried hard to blend into the undergrowth and control various kinds of ugly and excitable dog-creatures at the same time. The catering was not however up to par, £3.50 for a Frisbee style cheese burger complete with tomato sauce direct from the Hammer House of Horror surplus sell-off. The wasps remained in seasonally fine form and the birds of prey looked well groomed, smug and hungry, some peasant eye-pecking would have been nice but it's been banned since the Industrial Revolution.

Everything you need to survive out of doors is for sale here, most of it crap and overpriced but oddly "authentic" in some kind of non-Chinese way. It was strange to see two vendors leaning on huge 4x4s trying to sell hot-tubs the size of Cadillacs. These come complete with fins, shiny decks and seats, buttons and jets that can be aimed at every orifice. Just the thing to take back home and dump in the garden of your semi in Livingstone, as proof that bad taste gets everywhere quite easily these days.

The weekend footballing pilgrimage saw us visit the Fife town of Balingry where the local side were quickly destroyed in a 14 - 1 rout, with the Barclay family representative hitting a hat-trick. Many restless natives escorted us away from the pitch once the final whistle had sounded, their congratulatory messages ringing in our ears. I could be wrong but there is some evidence to suggest that Balingry and Inverkeithing are still at war with each other having never fully settled their differences after the great rape-seed flood and pig riot of 1557. 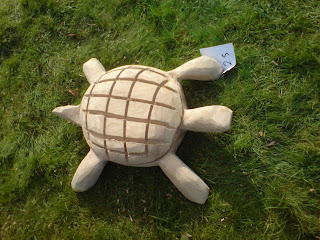 A 4x4 wooden turtle climbing on the ancient grassy banks of the Hopetoun lagoons : a snip at £25.00.
Posted by impossible songs at 2:48 PM
Email ThisBlogThis!Share to TwitterShare to FacebookShare to Pinterest