I don't remember the 50s either 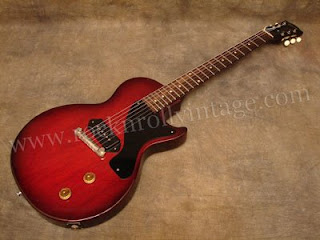 Now that another birthday is over I can reflect quietly on what little I can recall from the 50s, a decade arguably best forgotten. The funny thing is I can't really separate imaginings from early memories and photo views so I'm really struggling to grasp at what I do recall. School playground noises and first impressions, cold and coal fires and the little people in the radio playing violins or talking in strangely plumy voices - now that was entertainment. The 1955 Les Paul Jnr. in the photo was well beyond my knowledge and understanding but I may well have heard it's sounds mixed into the BGN somewhere on the Light Programme.
Edinburgh(Edinburghshire on the postcard) was where I would be taken for a day out in the train, fish and chips in Woolworth's cafe and chewing gum from a vending machine in the Waverly. This of course is a pre traffic problems Princess Street captured in 1955, we now know that the trams are about to make a return so to resolve the conflict once and for all. 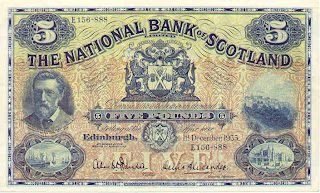 This fine piece of paper would have fed a family for a month in the 50s and still paid out some divi from the Coop, a roll of Andrex has a bit more value to it now. 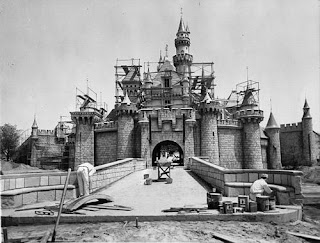 While we stumbled around in our hob-nailed boots here, the Americans were busy building Disneyland and preparing to invade my arid imagination with cartoons, films and loud music and daft ideas that would make me wish I was living there. That's a problem in the Scottish mind set, always feeling that you're just a few steps behind and missing out on something that you can't quite get to. 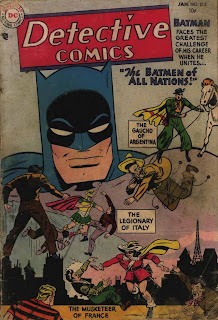 An early Batman cover with possibly Fascist overtones and frankly some bad composition and artwork, I never thought he'd still be going strong in 2008 as a the Dark Knight. 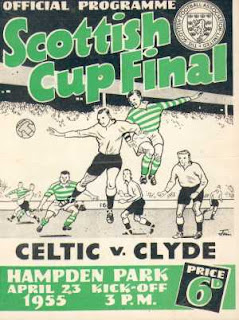 When real men with shiny heads and crew cuts played football, smoked twenty fags before the game and drank a couple of bottles of Piper Export at half time. The crowd peed into rolled up newspapers instead of visiting shiny metal urinals, ate pies at least a week old and the ball was modeled on the cannon balls used by Mon's Meg. Sponsorship was unknown and I doubt if TV coverage amounted to anything - cinema newsreel footage maybe was as much as you got. My earliest memories of football matches were that they were hard to understand, very cold and scary due to the huge crowd pressing in around you. Now you get a plastic seat on a concrete step set to encourage piles, the passing of numerous germs and claustrophobia. 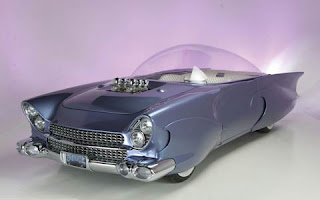 Something went badly wrong in the motor industry somewhere, this the kind of car we all wanted (and still do) so we could look cool, be like the Jetsons or something from Lost in Space. What did we get? The Morris Marina, the Austin Allegro, the Austin Maxi, the Ford Popular, the Kia Cee'd...where did it all go wrong?
Posted by impossible songs at 8:53 AM
Email ThisBlogThis!Share to TwitterShare to FacebookShare to Pinterest