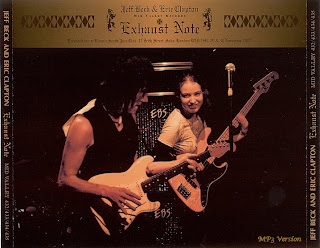 After a day spent mainly pottering, taxi driving and frying sausages I escaped into the whispy world of Sky Plus and watched a few things I'd recorded some time ago (or possibly recently, I didn't check) - Jeff Beck being the main thing. Jeff cuts a strangely Spinal Tap and not quite aged enough figure these days. He still has the bushy hair and the Indian bead thing going on as well - at 65. However image aside I enjoyed his concert(s) at Ronnie Scott's, some fine noodling and impressive slide work but a case really of style over substance. Jeff Beck is an excellent player and technically streets ahead of most exponents of the big fat guitar but he lacks the basic framework to be truly brilliant, that being decent songs to play over and into.

Having said that his instrumental version of the Beatle's "A day in the life" was marvellous and his soloing with Imogen Heep and Joss Stone was top of the range and tasteful. Old man Mr Slowhand came on for an encore but it really was "old boys" jamming the blues by then and didn't do much for me. Interesting to see Page and Plant lurking in the audience, makes you wonder what might have been had they all agreed on a band format back in '68.
Posted by impossible songs at 12:07 AM
Email ThisBlogThis!Share to TwitterShare to FacebookShare to Pinterest