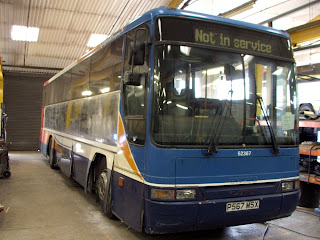 Fife is blockaded this weekend, held hostage by FETA terrorists bent on preventing the escape of millions of doe-eyed, straw sucking Fifers hoping to stretch out their credit card advances on the streets of Edinburgh, but FETA says "thou shalt not pass". The reverse is also true with central Scotland now sealed of from the bonnie southern banks of the Firth of Froth to the bonnie ex-banks of the credit crunch. I may sneak over into Fife tomorrow, early in the morning when no one is about and the border guards are occupied with the Sunday Mail crossword or queuing for a sausage and egg McMuffin breakfast at the golden arches drive-thru.

In the mean time my supposed creative weekend has hit a dip thanks to an unexpected and so far fruitless pussy cat search. Recording and mixing plans have been dropped in favour of head scratching, looking out of the window and wandering around the hedgerows. Bugger, things are looking bleak.
Posted by impossible songs at 3:09 PM
Email ThisBlogThis!Share to TwitterShare to FacebookShare to Pinterest