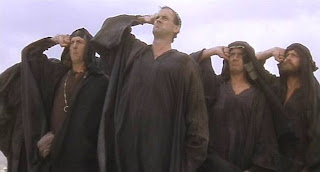 Why will the USA and the UK continue to support the state of Israel despite their violent and heavy handed conduct towards Gaza?

The answer is almost simple: The USA and all the other western powers that have grown into Christian based democracies cannot, for a series theological, historical, moral and philosophical reasons bring themselves to condemn Israel. In the minds of all the modern Hebrew based religions and the government systems that they co-support the position of Israel regards the “rest of the world” remains as it was first described in the Five Books of Moses (the first five books of the Old Testament). The Jewish nation remains the “apple of God’s eye”. Put simply they are God’s chosen people and their struggle to maintain Israel is fully justified by the earliest of Bible teachings and is therefore not a principal to be trifled or disagreed with.

Many contemporary church sermons, methods of teaching and pillars of thinking remain based on these early writings, available to all as the books Genesis to Deuteronomy, translated and incorporated into the Holy Bible. To unpick one part undermines all the other passages, so if Israel’s status is threatened then so is the creation story, the doctrine of original sin and the fall, the Ten Commandments, the moral absolute that is the Hebrew Jehovah and the need for a messiah to arrive to redeem fallen mankind. The rest of the Old Testament and the significance and relevance of the New would also fall apart as a piece of joined up literature and template for life. It’s a bummer of a theological trap that the USA’s political system and its church based followers cannot allow themselves to fall into, otherwise we’re (as stupid white people) all completely guilty of all the (western) colonisation and evangelical crimes of the last 2009 years and we’ve no mandate to move forward.

The violent and intolerant situation we’re now seeing is worsened by harkening back to the latitude God apparently gave to early Jewish heroes like Joshua and Caleb to go out and ethnically cleanse the tribes that were occupying the promised land of Israel when the Jews returned from captivity in Egypt. That thinking still lives on and in various forms, both practically and metaphorically and influences a great deal of modern political thinking and Christian teaching. There are Jews, there are Christians and there are the rest of us, so sending air strikes into schools and hospitals in Gaza when you view the victims as being outside of the love and care of your God is easy. The Christian religion is very good at the convenient use of exclusion, separatism and the drawing of hard, judgemental lines, often despite what the very core values of the religion may profess to be about.

As a further complication the numerous Biblical prophecies about the progress of the Jewish people, their dispersion, persecution (no joke) and their return to Palestine in 1948 all add weight and depth to their beliefs. A further problem is that the other “yet to be” stories at the far end of the Bible work backwards towards the present day. They contain a huge amount of prophetic writing that shows the end of the world, Armageddon, occurring above or around Jerusalem following a long series of violent wars and conflicts all fought out in the Middle East. What good upstanding, church going Christian or God fearing Jew can afford to deny the significance of these current events when seen in the context of a Biblical wipe-out? The whole of the Middle East has now become a huge self fulfilling prophecy that cannot be overturned because so much is a stake for the credibility of our (sic) cherished beliefs, rich, fat and obstinate churches and wayward parliaments. Never mind the oil either.

Everybody wants a little certainty and justification in their lives and that’s what the Bible, when interpreted in this fundamental way gives. Good guys, bad guys, slanted eyed Arabs or dark skinned godless tribes from the edge of the world, they are sheep or they are goats. Sadly the people of Gaza are all in the wrong place at the wrong time and because Hamas is bad (which it is) and the vengeful God has said so, we need to fix it with our tanks and aircraft regardless of where that leads (and in the minds of many because it leads to certain Armageddon).

It helps to look for constructive humour from time to time but where can you find it these days?
Posted by impossible songs at 5:51 PM
Email ThisBlogThis!Share to TwitterShare to FacebookShare to Pinterest