Lost in a car park 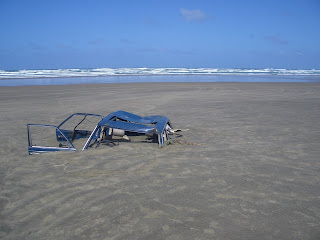 The trouble with silver cars is that a) they are common as muck and b) muck is very common, so returning to a large open car park after dark and trying to locate your ride home can be tricky. Usually at Edinburgh airport I park in the multi and manage to just about remember the level, the rest is easy. On Wednesday I chose the open air long stay in a burst of economic anguish and thanks to a quick bus pick up and little thought on my part, on my return I could not find my car.

Panic however didn't set in, I just walked around for a while, at angles, across bays, from sign to sign, from pay point to bus stop. Many cars were found, none were mine. I thought about asking for help at the office but the potential humiliation was too much so the random walking continued until after about twenty minutes we were reunited and I sped of as if nothing had happened. The last time this happened was in Disneyland when I couldn't remember the colour of the hire car only that it was in the Dopey area with a cuddly toy on the back window shelf.

Favourite old tunes of the day:

Soup of the (yester)day: mature vegetable.

Sweet of the day: Chunky Kit-Kat.

Pie of the day: Mince round.

Effect of the day: Phaser.
Posted by impossible songs at 3:00 PM
Email ThisBlogThis!Share to TwitterShare to FacebookShare to Pinterest