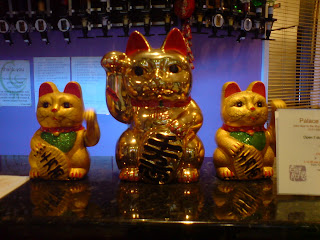 The lucky cats at Ocean Terminal welcome MMIX
2009 started frosty, clean and sharp but has now turned back to the customary wet, dripping and muddy mud-fest that we struggle through daily. I found this out whilst transporting the Christmas tree from it's triumphant stance in the lounge to a less than triumphant and much more undignified slow death on the bonfire site. Stripped naked and neglected and due to be burned during some future drunken barbecue it would make a fine central character in some poignant allegorical tale of spiritual decline. Today and in the coming days many such trees will find themselves on death-row, behind a hedge or wall or compressed into the brown wheelie bin you can never fill in winter. I also hoovered without breaking anything and celebrated with coffee and twenty minutes of Planet Rock's heaviest heavy metal muck from the past reminding me of the brief time I spent on duty as a youth. A state of mind and dishevelled dress that was not encouraged, recognised or understood by the authorities in Central Scotland in 1969.They did play "Little Wing" by JH which sounded fab, hard to believe it's over forty years old and still fresh as an Afghan Black five skinner rolled out on a gate fold sleeve.

So all the decorations are down and organised in boxes and colours and so on but they will still manage to be in a complete mess when we next unpack them, the 2008 Christmas Gremlins will be to blame.

Determined to beat the gloom I drove into the 'Ferry to see what was on, as expected shops were shut and barricaded, people walked dogs aimlessly and a heavy dull set of clouds were set up in the sky. To cheer myself up I browsed around the M&S shop in the petrol station checking the grim newspaper headlines, the ready meals and having a useful conversation with a cash machine. Home again for ironing, fish pie and farewell to Paul who was heading back to the great industrial wasteland and Irish refugee camp that is Scallie country.

Yesterday - Science Fiction, Ghostly Tales and Fairy Stories: Well that would be Ali's journey through the mind of Arthur C Clarke via his writings, Jonathan Creek's strange and badly scripted and plotted murderous bathroom and the Brothers Grimm with Heath Ledger and Matt Damon. I watched the first half hour of this thinking "what a complete mess" then my agile mind twigged that it must be the work of Terry Gilliam otherwise how could it so creative, chaotic and unfunny. In the end it's relentless stupidity won me over and as the story ended almost happily I was hungry for cheese, wine, home made bread and cough mixture. I slept like the Sleeping Beauty albeit with a molten throat. 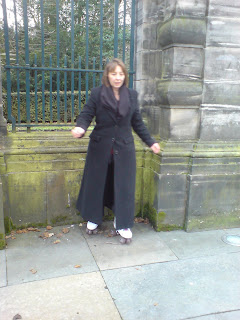 She walks, talks and roller skates.
Posted by impossible songs at 3:50 PM
Email ThisBlogThis!Share to TwitterShare to FacebookShare to Pinterest