Worse than the Katzenjammer Kids 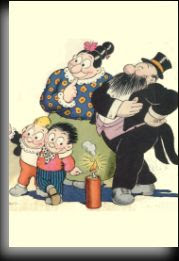 The (outside) world events as portrayed in the news often leave me puzzled and ultimately cynical and pessimistic. The repeated conflict in Gaza, the aggression and ludicrous self belief of the Israelis, the belligerent Hammas forces, the impotence of the Western powers and the intransigence and posturing of the Soviet Bloc (or whatever it calls itself). Meanwhile the Arabs and sunglass wearing followers of Islam bay like tethered hounds or fiddle for quick solutions as if they were looking for the keys to their Lexus and Cadillac SUVs. It seems like every man-jack is determined to fulfil all the garish Biblical prophecies in the book of Revelation or the Qur’an and then some. Lions, beasts, whores, harlots, lakes of fire, tattooed numbers, rockets and AK47s all line up to confuse and pick out an eternal story than runs and runs and doesn’t get better. Meanwhile innocent people suffer and the arms brokers make a few million more. Where’s the bit in the Bible about wiping the planet clean and starting again?

Having said that who wants a clean planet? If we got the chance to start again we’ve all be in fig leaves and fighting over the last banana before burning down the forest to create a chill-out zone and a clearing to plant out our carrots. Then we’d snare the last of the rabbits before turning them into warm slippers and furry hats then feeding the remains to the feral cats we were trying to domesticate. That is of course unless we change track, mind sets and beliefs and adopt the “Celebration” model for community life. Celebration in Florida is a (more than most) manufactured town and a master-planned community in Osceola County near Disney World. It was developed over time by The Walt Disney Company albeit their influence has decreased over the years. Perhaps the answer is out there, not in focused religions, acute political stances or blind tribalism but in manufactured, sanitized small communities that manage themselves and build big fences and feed the residents a nice big dose of Soma on a regular basis – in the water mains, drinks machines and chip shop vinegar. The application of this may just make the likes of Cumbernauld, Glenrothes or the Middle East acceptable places to stay and would ease the practical problems of government a thousand fold. Strange that the Israelis haven’t as yet demonstrably tapped into the Gazza water supplies.

Power is fine but useless without control. Benign control only comes via healthy fear or slavish love but fear is the most effective. Love can be too strong and is prone to turning, love also spawns idealism – itself a threat and possible destabilizing agent. So whoever controls the water controls the population – you don’t need their hearts and minds when you have a grip on their plumbing systems. Barack Obama and the Presbyterian Church know this very well and this will be one of their key subliminally managed strategies in the thousand year plan.

I probably won’t watch much of Celebrity Big Brother, firstly there are no celebrities in it that I admire, many of them I don’t even know and secondly like most reality shows the banality and repetition is now becoming tedious – the format is dead. A third reason to avoid it is the hooting Davina pulling faces and shoving her hair out of her eyes. January should find me staring into the screen savoring old Coen Bros. films or hijacking Ali’s discovery of Grey’s Anatomy or her boxed set of Bones – that seems better although Ulrika Jonsson and Tommy Sheridan are a possible nightmare love match from either Heaven or Valhalla. Still thinking of films what is the cultural importance and legacy of the movie Garden State?

I picked up a random radio question, “what makes you/me proud to be British (or Scottish)?” For once I can be positive about something and can readily summon up a list of answers in a rough top 10:

Kilts, tartans, whisky and clans (but not Robbie Burns).
Hills, lochs and the Forth Bridges.
Getting to the top of the M6, seeing the gloom ahead and knowing I’m nearly home.
The selective use of bagpipes but not as WMDs.
Fife, Edinburgh Castle, the Clyde Submarine Base, Leuchars and Lossiemouth.
Boiled eggs and soldiers, beef sausage, Irn Bru, pies and bridies.
The East Neuk and the rise and decline of herring fishing.
Pubs, chip shops and Oor Wullie as they used to be.
Scottish weddings and (in a dour and respectful way) funerals.
Chick Murray and the eclectic and shambolic world of Scottish comedy.
Posted by impossible songs at 1:30 PM
Email ThisBlogThis!Share to TwitterShare to FacebookShare to Pinterest