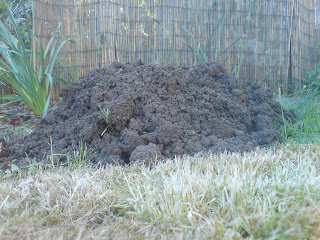 Despite the hot weather the moles have carried on working feverishly in the cool and the dark of the West Lothian underground. The mole hill is getting bigger and we are rather perplexed as to what action to take next - maybe they'll just stop, maybe they won't, maybe the house will collapse. A major worry is that moles will form an unholy alliance with the Japanese Knotweed and that may signal the end of everything.

More from the underground.

Last night we discovered another underground empire, this one overseen by a large toad. We were moving a slab and found the toad's tunnels formed by white washed snail shells, pebbles and twigs and in the middle the grey and wriggling form of the toad. After some inspection and wonderment we recovered this chilling labyrinth with a smaller stone and peace was restored. Meanwhile in another part of the garden the potatoes have started to sprout vigorously, the plan is coming together.

Posted by impossible songs at 7:59 PM
Email ThisBlogThis!Share to TwitterShare to FacebookShare to Pinterest