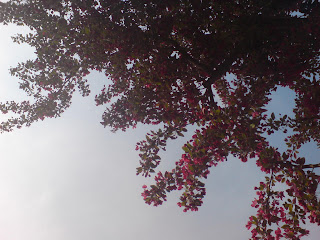 Martin and Hieke's apple tree - last weekend.
Our May day holiday began with a coffee on the couch and the bewildering viewing that is BBC early morning news. First there was one of my least favourite politicians, Harriet Harman saying that though she was ambitious she was satisfied to be GB's deputy and the top job wasn't for her. Unbelievable. This was followed by the highly likable Sister Beckett, the art critic/historian nun who described the viewing of Christian Icons as "leading us beyond the known", which I thought was rather good if a little optimistic. "They show us more" she added, then in some strange rhetorical way asked herself the question "what is more?" Neither her or the interviewers bothered to answer - and the question hung in the mind and mid air as it quite rightly should. Next up was a puzzled looking Ian Broudie back with a Lightning Seeds album after ten years. Not something I'm excited about nor was Ian really, come backs are tricky and for some best avoided.

Last night we all sat riveted, welded and with jumpy legs as the 100th episode of Lost was aired. It was a bottle of red wine and three double Baillie's' session with the plot centering on Faraday's time travelling injuries and the dilemmas generated by trying to engineer the future from the past, the usual stuff, fun, irritating and compelling. Only two left in this series.

Posted by impossible songs at 9:42 AM
Email ThisBlogThis!Share to TwitterShare to FacebookShare to Pinterest