Periodic Tables Tuesday (as ever) 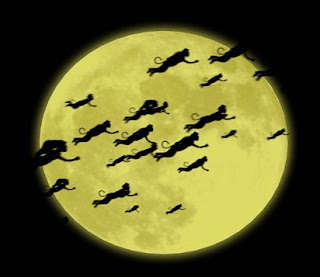 Full Moon over the 'Ferry.

Five portions of fruit a day is the target, the score is a little less but heading in the right direction but I have a few questions: How many portions (or protons, much more interesting) are in a pineapple, a water melon and a chicken. Oh and what is the healthy status and relevant position of a Muller fruit corner?

Flight of the Conchords is funny and clever and in the space of a week I’ve watched all the episodes in the first series. Not normal behaviour but fun and useful.

Van Gogh hacked his own ear off. True but only because Gauguin suggested that self harming was going to be the next big thing.
A hanged Munchkin can be seen in the Wizard of Oz. False but there is now a new theory that various members of Pink Floyd played the flying monkeys.
Mussolini got the trains running on time. False, he simply got the timetable rewritten to match the actual times the trains were running to.
The Great Wall of China can be seen from space. False, but it is true that space can be seen from the Great Wall of China.
Swallowed chewing gum stays in your system for seven years. False it says in for fourteen years, a bit like hot dogs or red meat.
Walt Disney’s body was frozen. True, of course it was. He was stone cold dead.
Bob Holness played saxophone on “Baker Street”. False he played saxophone on “Born to Run”.
A coin dropped from a skyscraper will kill a pedestrian. True, provided it’s a 50kg New Guinea stone penny (with a hole carved into the middle).
Lemmings deliberately commit suicide. False but one or two have done away with themselves when their novels or works of poetry failed to be selected for publication.

Not really impressed by the use of colour here but was it 1936 and it's all allegorical and only relevant to the turn of the century (1900) anyway, or the end of the world.

Posted by impossible songs at 9:55 PM
Email ThisBlogThis!Share to TwitterShare to FacebookShare to Pinterest