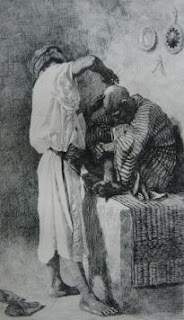 The simple pleasure of getting a decent haircut.
The world remains further away when viewed through my failing glasses, now due an upgrade. All things are distant and in some cases pleasantly blurred replicating the effect of three good glasses of red wine but without the after taste. The big decision on whether to plump for a haircut or a visit to the opticians’ is not easy, a planned visit to the dentist also looms and there are other complications. The barber or hairdresser is the cheapest and easiest option and the one most likely to be taken, probably on Friday. For a fiver and a one pound tip my unruly and thinning barnet can be tidied up to an almost presentable point. All I have to do is grin and dimly endure the drab conversation and blank boredom generated by staring at myself as a shrouded floating head in a large mirror. The opticians is less straightforward, I have to book and then wear a number of devices, read and concentrate and then pick out a pair of frames from pre-arranged selection, most of which will look weird. All glasses and spectacles are weird, it’s just that we’ve become used to seeing them and using them. Anyway, the ones I like will be expensive and so I’ll settle for something cheaper and hopefully thinner and then not think of such things for another three years or so. The dentist is more of a routine, like a car MOT but with even less meaningful conversations and a bit more pain and discomfort. Radio Forth plays in a background in the surgery, this adds to the pain, in fact most of this audio assault is worse and more distracting than the dental pain. Perhaps the dentist is making some point here, there is the pain of the monthly £18.66 to consider also. (In the end I go to the barbers, there are five guys ahead of me in the queue and so I read a complimentary copy of the Sun then wait some more. My hair is then cut but not without a pointless conversation about holidays in Egypt and the many gay waiters there, apparently). 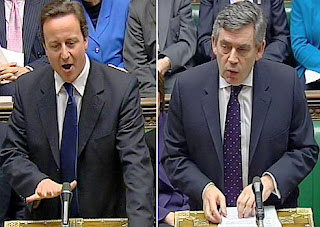 Neither commands respect, neither is fit to run what's left of the country.

Intelligent, capable, and seemingly competent MPs charged with running the country seem unable to run their own lives or account for their expenses. When caught out, having in some cases committed obvious fraud they simply say “I made a mistake and I’m sorry”. In any other walk of life or career that statement would quite simply get you fired, you’d lose all professional credibility and you’d possibly go to jail, but this is Britain where we accept politicians saying glib, patronising and stupid things (“we’re doing everything can” - just what is that?) and then when caught out some one sided investigation runs for two years at the taxpayers’ expense and ends up drawing no clear conclusions and it all blows over until the next whistle is blown. Nice work if you can get it.
Posted by impossible songs at 7:06 PM
Email ThisBlogThis!Share to TwitterShare to FacebookShare to Pinterest