Some time in New York City 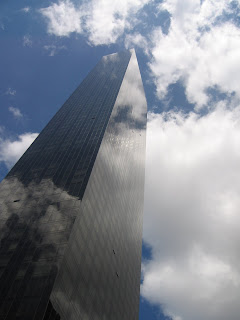 J D Salinger: I read “Catcher in the Rye” once, sometime in the eighties and when I was a long way from suffering any kind of teenage angst. I think in fact it was mid-thirties angst and self worth problems I had at the time and I'd not been to NYC. I read about half of it in one sitting, alone on a bench on the seafront (?) at Kirkcaldy as I recall. I’m not sure why it missed reading it a secondary school in the late sixties, it never figured on the approved list of my young Socialist English teachers along with Aldous Huxley and George Orwell and it didn’t seem to strike the same chords as Kerouac or Tolkien. Salinger and Kerouac both managed the same trick, one big blockbuster book that outlived them and outran them, everything else becoming second best and they were left waiting for the next big wave, a wave that never came. Last year I did think about rereading Catcher again, possibly in some bid to either catch up with myself or relive in these silver years a stolen teenage moment I managed to deny and miss. Maybe.

Maggie: I was greatly encouraged to hear the news that at one time Margaret Thatcher ate 28 eggs a week. This is of course because I like eggs not MT. These were key items in her victory diet of 1979. I recall at that time I was on a similar but possibly less effective or successful diet: This was the chip piece and brown sauce diet. It consisted of real i. e. Mazola deep fried chips hand chipped from actual potatoes, plain bread (well buttered) and HP sauce. This dietary supplement was generally consumed 7 times a week, every day usually about 2100 hrs. I lived to tell the tale but failed in my low key bid to lead the Conservative Party. True.

Tony Blair: I’ve never been a fan of his and I disagreed with the war in Iraq and various other Nulabour pieces of work and control freakery. What I dislike however is the desperate raking over of ashes we see in the current spate of costly inquiries that are peering into things in general. In the Iraq Inquiry anyone who expected any other outcome that the one we are seeing played out is seriously deluded and bound to be disappointed, it‘s always the way. The injured families’ hurt, the political damage done and the frustration expressed in howls for signs of regret and heartfelt apologies will never be satisfied or be provided with adequate closure. Protesters can protest, that’s easy, all you need is a voice, some spare time and a bus ticket to London or an Internet connection. Families must mourn their loss and no amount of anger, pained frustration or half hearted acknowledgement brings back a lost loved one. Whatever you may think presidents and prime ministers are there to make decisions and then take action. They will be of course motivated and influenced by all sorts things and will play long and short games in the process - but awkward, unpalatable and ultimately unpopular decisions go with the job - and we put them there to act on out behalf and we have to put up with their mistakes, up to a point. So we learn a lesson and elect some other party, hope for a better set of foreign policies and settle for defending our own small island and not some barren and dusty far corner of the world. Unlikely.

All day pyjamas: Who does this in public? It doesn’t happen much around here as far as I’ve seen though I’m maybe failing to visit Tesco, the school gates or various petrol station forecourts at the proper time to witness this modern phenomenon. Presumably it’s an inner-city problem based around the last minute needs of younger and style challenged parents (mostly young mums?) with a bias for leisurewear all so desperate for their 28 eggs and an emergency copy of the Catcher in the Rye - or just a packet of fags and a can of Pepsi? Actually I think I once went to France without a jumper and with my pyjamas on under my jeans; it may have been just a bad dream.
Posted by impossible songs at 10:05 PM
Email ThisBlogThis!Share to TwitterShare to FacebookShare to Pinterest