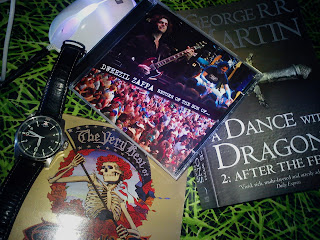 TV: Jules Holland is probably a really nice guy and a great musician but his TV show is as dull as ditch water and Paul Weller or somebody like him is on it every week. I like the fact that if appears to be live (is it?) but as a way to enjoy music it seldom works for me. Back to Radio 6 or Game of Thrones or Modern Family I think.

Awards and Award Shows: Who gives a stuff really?

Cookery: I made a fish pie today that was tasty but as heavy as lead, I now realise that it's possible to put too much fish in a fish pie, something I'd not have considered possible, but it is. Next thing I'm trying will be to put too much chicken in a chicken pie.

Pics & Words: Here's a handy link to a book that Fraser Drummond has just created - fine photos and lyrics, the Sound of Confushion.
Posted by impossible songs at 10:32 PM
Email ThisBlogThis!Share to TwitterShare to FacebookShare to Pinterest