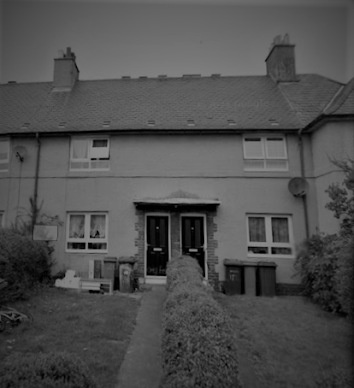 In his book "And Away" Bob Mortimer talks about how as a child there always was at least one nominated witch's house* in his street. As I recall in my street (Selvage Place, Rosyth) there were at least two, albeit the witchy evidence was shaky and vague but nonetheless these houses were assumed to be inhabited by witches of a sort (none kept miniature Shetland ponies* indoors watching a flickering black and white TV however). Naturally they were older ladies, on their own and considered to be strange, as far as we (the street's ragged arsed children) knew.

60 years ago these once "Dockyard" houses didn't look as they do now (via Google), they were even a bit more rundown and overgrown then. I guess the great sell off encouraged some DIY.  Various historical changes in culture and ownership have altered things but it (above) was the best photo I could err... manipulate.

The house on the left was my mum and dad's, the house on the right was occupied by Miss Erskine, AKA the Witch. I knew she was a witch because I and most of the other street children were afraid of her. That seemed a good reason for her be considered an actual witch. She lived alone, seldom appeared in public but when she did it was usually to screech or shout at us for making a noise, touching her rickety garden gate or kicking a ball into her garden. Balls that entered her garden were never seen again or returned so there was a general sense of apprehension that this might also apply to children.

My parents also said she should be avoided; she was a bit "odd" they said and I know that my dad had a few arguments with her regarding the clipping of a shared hedge. Unkempt hedges were usually a sign of either a poor or dysfunctional family or a witch's residence as far as I was concerned. When the grocer's horse and cart came to the street we all stood well back from her while she was buying her provisions. The horse snorted, rattled his reins and clipped his hooves, clearly disturbed.  A couple of times when my father was taken ill an ambulance was needed, all the street turned out to spectate and offer help but she didn't stir.

Another witch lived across the road in the house opposite us. With an overgrown garden and high hedges it was the home of Miss Nye. The thick beech hedge formed a dark archway over her gate, shielding her windows and front door; very sinister. She too was alone and old but seemed a little more kindly, a better way to attract fresh victims. She always wore a black beret, thick glasses and a large dark coat. She seldom emerged from the house other than to go to the shops twice a week carrying a large and mysterious black leather bag. I assumed there were potions and spells inside it and perhaps the dead fingers of naughty children.

There was a third witch, a few streets away in "DollyTown". Like a kind of elderly Kate Bush with crazy long dark hair, voluminous black skirts and an overcoat way too big for her. I have a (possibly false) memory of her dancing in a tribal fashion around in her unfenced, unhedged garden and children cat-calling her as she silently moved across the grass to her inner music. No one ever ever made eye contact with her either as she rushed between her home and the Co-op collecting her sliced pan bread wrapped in wax paper.

My dad may have told me that her husband died in the war or that there was some other family tragedy. As it was the late fifties/early sixties then, then that might have explained something on the origins of these sad, eccentric pseudo witches. Just broken people really, trapped behind closed curtains, unhappy in their austerity and taunted by stupid kids and the complexity of a Cold War life. I'll never know their back stories but they left strong if now cloudy impressions.

Posted by impossible songs at 6:33 AM
Email ThisBlogThis!Share to TwitterShare to FacebookShare to Pinterest