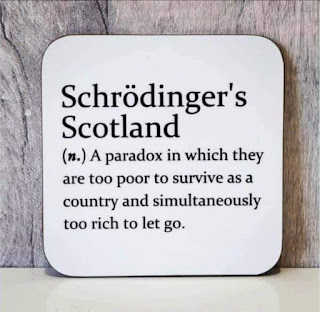 Sometimes I worry that, despite what my thoughts seem to say, based on received messages and processing,  I just don't feel strongly enough about things that are clearly important. Having said that I probably feel too strongly about things that, in the great scheme are trivial but more personal.

When it affects you personally it makes all the difference, when it doesn't you can be comfortably indifferent. At the same time some people are really being affected, ruined indeed by something you are indifferent to. Perhaps it's not you or me, just somebody else who we don't know or haven't even seen. Owning and keeping a wide ranging, accurate, operating empathy radar system is hard work.

The word "important"when applied to things in life is tricky to pin down in a relevant way because it's meaning really slides according to circumstances, well being, comfort and danger. Today in Scotland, we, the Scots are completely all over the place with "important" conflicting ideas, shifting beliefs and panic based priorities and that is one reason* why we're screwed and will continue to be so. We're a nation of frightened rabbits, mostly. Governments like that.

This also applies across the rest of humanity but the Scots have a bad case of it. Words to describe it might be a fuzzy, watery, self induced  schizophrenia of some sort - the Scotland Syndrome.

*The other reasons are both current and historical but I can't be arsed listing them.

Posted by impossible songs at 7:29 AM
Email ThisBlogThis!Share to TwitterShare to FacebookShare to Pinterest