Rainbows all over your blues 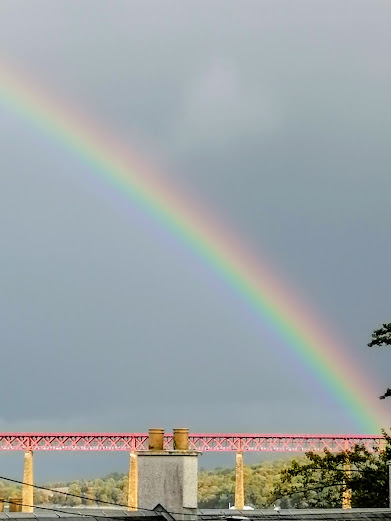 The daily rainbow: I remember rainbows, invented by Noah, then  hijacked by LGBT flags or whatever groups, My Little Pony, unicorn arty stuff and cheap Chinese toys, pop festival types, questionable woolly jumper choices and so on. We reached peak rainbow saturation point some time ago but still there is no clear sign of the once heavenly sign receding in popularity and over use. Poor exhausted, misunderstood rainbows.
Mr Roy G Biv has a lot to answer for with his pre-rain messages. His pelting downpours brought via global warming with their flash floods will lead to a plague of malignant rainbows eventually. Instead of signifying God's fairly dodgy covenant with man it'll become a sign of warning, imminent danger and destruction with the possibility of drowning in fast flowing muddy waters. Or not as the case may be but I'm pretty sure Jackson Browne said the planet would be washed clean one of these days.
Posted by impossible songs at 7:35 AM
Email ThisBlogThis!Share to TwitterShare to FacebookShare to Pinterest