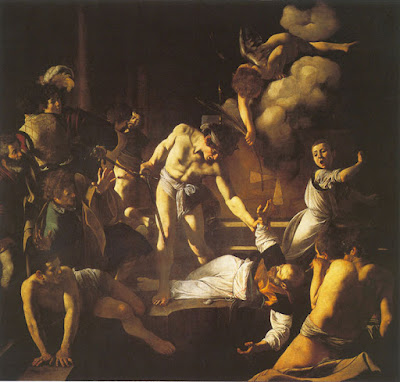 Martyrdom always makes for tricky death circumstances both for the martyr and those caught in the fallout. There can be no clear sense of the depth and meaning of it all at the time and the big award (?) can come way too quickly. Whether you're an innocent, a terrorist, a politician or a "legitimate" target doesn't really matter and being dead there's not much you can do about it. Other agencies take control. Man is not an honest beast.
They twist the facts: Tragedy strikes like a thief in the night but that doesn't mean reality, experience and truth need to be somehow re-calibrated to fit this unexpected twist in the narrative. You are what you were.

Lives lived in the spotlight are often distorted by untimely death. A golden glow can descend and the martyr is made up for the pretense that is eternity. "He was a man of the people", "one of us and a good sort", "resilient and honorable", "never had a bad word", "queen of hearts" etc. There's all that and then there are the actual records of deeds, good and not so. Then there's the uncensored persistence of memory.

Nothing and nobody is ever just black and white, there are shades of grey and beyond, family grief and knowledge being the most balanced measures, not the medias'. A life is a story, if other people write it, based on an emotional wave or some circumstantial colours, it's unlikely to be balanced or accurate.

I doubt Caravaggio was bothered by the reputation or status of his subjects or of his sponsors other than it allowed for a fee commensurate with whatever that might have been and whoever wanted to cough up for the spiritual and social cosmetic enhancements his paintings could provide once displayed.

Then there's the thousands that have died of Covid in the UK ... martyrs of a different kind?

Posted by impossible songs at 7:24 AM
Email ThisBlogThis!Share to TwitterShare to FacebookShare to Pinterest