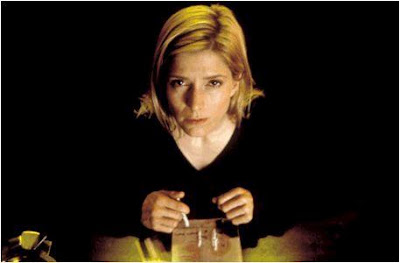 She comes in colours

The good news is that I am no longer angry nor am I a young man. Two kinds of conflicting stat us worth avoiding and ones that if brought together can be disastrous. I put my newly acquired peace of mind down to downing large quantities of blue milk, red wine and green vegetables. This colourful diet is also supplemented by eggs (whites and yellows) and more of the ubiquitous Muller corners. You are what you eat - I am not referring to the famous Bernard Manning joke here either.

I spent some time reading a few essays and extended reviews about the film Magnolia. I watched it once some time a go and naturally missed a few of the connections. I may watch it again - there is something interesting about the range of modern films that have been set in the San Fernando Valley: Crash, Boogie Nights and 2 Days in the Valley but I’ve no idea what it is.

Kids let loose with shouting presenters and multi coloured puppets that belong to no recognisable species and behave in alien ways. News and weather that repeats and repeats interspersed with novelty items, most of which are a week old and have been battered to death on the web. Advertisements for dubious services that can only be required by a minority of viewers, it can only be early morning weekend TV.

Lehman Brothers massive risk taking come unstuck a year ago. Where did that year go and how come are we still alive, shopping and functioning?
Posted by impossible songs at 6:47 PM
Email ThisBlogThis!Share to TwitterShare to FacebookShare to Pinterest