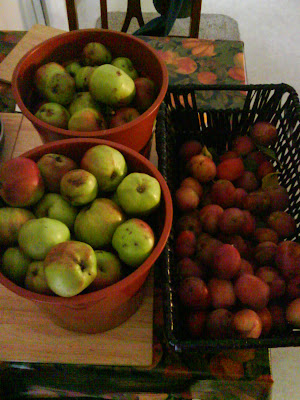 There was a certain air of cottage industry in the cottage yesterday. The effort began with some strenuous stretching and pole dancing in desperate attempt to pick apples from the apple tree and a few odd plums from the plum tree. So using a combination of a step ladder, a pole and a picking head we harvested about six pounds of apples in the rain and also in buckets. The procedure was reminiscent of something that might have been depicted in a Spike Milligan cartoon, all spiky lines and scaffolding. The apples and plums form the base ingredients for the chutney, other herbs, spices, vinegar and mysterious substances were added after the marathon peeling session was done. Then a handy cauldron was placed on the open fire and we allowed the mixture to stew and simmer. In a parallel exercise glass storage jars were sterilised, castrated, vulcanised and baked in the electric Aga in anticipation of being filled with the brown boiled broth. Once two months have passed we will know if we have succeeded.

The Beatles work, play and general level of exceptional genius is being celebrated mostly in black and white on the BBC. 40 years since this and 42 years since that and time has passed we are told. Everything is significant and everybody involved had a hand in changing popular culture as they built a chain smoking road out of the sixties that funnily enough got us into the seventies. They regularly remind us of these things when wheeled out on chat shows and chatting interminably in the Sunday supplements. John Lennon had a blacked out Rolls Royce which was understandably very difficult to steer from 60 to 70 or even at relatively slow speeds. All of that made getting out of the seventies a bit of a struggle but eventually pop music made it to the eighties: good in places I‘m told, some remarkable births occurred and stray mullets were contrived before surprise surprise along came the nineties. Disappointment was all around and unbridled up to a point. So I’m not sure about this at all and whatever happened next had a smiley face, big films, drug references and air conditioning attached and sadly a number of good people didn’t quite make it.

Back in the sixties things are still the way they were and that’s relief to all of us who remain resistant to change and move outside of time, according to the BBC we are somewhere in India. I believe Ringo owned a special Mini filled with drums but not oil drums, they don’t make them like that anymore. Still we listen to Sgt Pepper, the album and the stereo sound, perhaps not appreciating the music and invariably misunderstanding the lyrics, but I am constantly reminded that nothing is real and I was rather immature at the time and so were you. Some say that Abbey Road is a better record anyway.

The chutney is now in the jar(s). The diary is closed for the time being.

Perfectly poised, posing in their pots, the chutney sets and hibernates till ready.
Posted by impossible songs at 11:16 AM
Email ThisBlogThis!Share to TwitterShare to FacebookShare to Pinterest