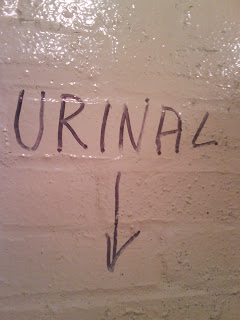 Up with the lark this morning and over to Fife for Sunday football in the sunny grotto that is Glenrothes. Breakfast was a can of nicely chilled Dr Pepper and a Stephen's chocolate donut (24 hours old but none the worse for that) whilst catching the rays from a watery September sun. The signing information in the football facilities (changing rooms) bore a strong resemblance to some old Far Side cartoons that you may or may not recall. Everything was nicely marked with magic marker pen and block capital letters, just in case the casual visitor failed to mistake "home" for "away" or in the worst case I suppose "shower" for "urinal". All in the Far Side spirit of "let's get a few things straight around here", something that at times can be a great help in this modern world. Anyway we won the match 5 - 2 with Barclay Jr. getting the fourth.

Next it was back to the Auld Grey Toun where Tesco have expanded their premises but unfortunately not their ideas - so the oddly named Carphone Warehouse came to the rescue. Don't judge a book by it's cover or a superstore by it's advertising or it's relative floorspace.
Posted by impossible songs at 6:15 PM
Email ThisBlogThis!Share to TwitterShare to FacebookShare to Pinterest