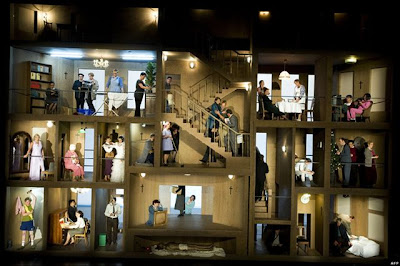 Sometimes our house is quite busy, full of friends and family or the same but in the reverse order. It’s nothing like this photograph however but I’ve taken to being rather fond of it (the photo), a feeling that will rapidly pass. I quite like the horizontal figure in the floor level basement beneath the mock-Tudor Chapel.

So we trailed along the trail that is known as the Fife Coastal Path and came upon the fine West Lothian town that is Borrowstone Town Nessnessness or Bo’ness for short. At that point we realised that we had strayed quite away from the silvery Tay and had little alternative other than pay a visit to the motor museum, mostly on account of the incessant rain (see previous blogs) and the need to chat. It was well worth the loss of a fiver to see a fine line of James Bond vehicles, 50’s relics and a shining example of my favourite car of all time, a Delorean. These magic beasts could have been all over our streets and motorways had it not been for the buffoonery of the UK government, the failure of the tax payer to stump up some cash, the Troubles and the uncovering of one or two of JD’s more unfortunate and ill conceived business practices. I’m sure that in some parallel universe the venture succeeded and that gleaming Deloreans are out there now, cruising down leafy boulevards, hogging the fast lane, school running only and petulant children and taking a bashing in ASDA car parks. 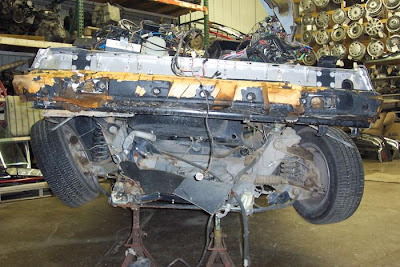 Front ended Delorean that may never quite recover from it's car park bashing.
Posted by impossible songs at 7:30 PM
Email ThisBlogThis!Share to TwitterShare to FacebookShare to Pinterest