The artist as a younger, dumber man. 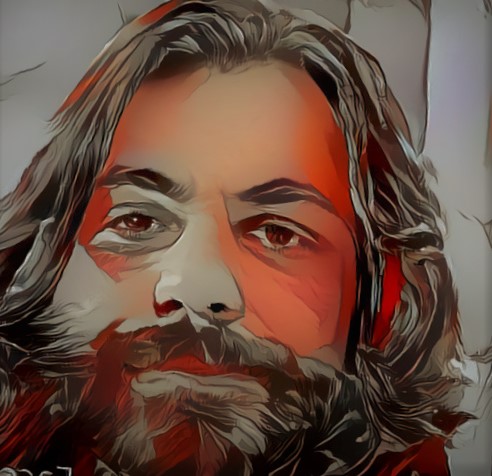 And so it came to be, one sweet spring morning in 1973, a young man bearing a slight resemblance to Charles Manson stepped onto a ferry from the fictional port of Dublin and made his way, by degrees and diversions to the motherland and the English city of Portsmouth. But not quite. He'd no clear idea what he was about or that one day his FaceApp distorted image might appear on an unsupported and unloved blog, but it did. The future was somewhere else and actually best avoided. He fancied himself as a poet for no good reason, having neither read nor understood any it and then only ever gazed over glossy magazines of a certain kind, but he knew that an education and experience in life were closely linked, so poetry it was to be (unless music might grip him) and the life of a rover. An unusual choice for a man with little respect for God's word or the word of man or a decent sense of direction. He had written some material recently however:

"There was a young lady from Dublin, whose ailment was really quite troublin' ".

He was stuck at this point but remained confident that the train ticket to Portsmouth was the start of a journey that would surely fill in all of those elusive and missing words from start to bloody finish. Those that began at the start of the book and wound their lonely way across page after page until, tired, sweaty and hungry they reached the end. After the end there would be a few more blank pages, as was the custom. Forwards, afterwards, thanks and perhaps an index if the subject matter warranted such a device.

Alighting from the boat in Liverpool he thought of two things, the first being his lack of money and the second begin a clear idea of how to proceed (other than using the newly purchased ticket to Portsmouth Harbour Station). He did know that it was possible to get another ferry from Portsmouth to France. That was an interesting prospect, la belle France. Art with a capital Art. A short hop across the Channel and perhaps an opportunity for agricultural work, farm girls and cheap wine and a garret. It was a slow burning fantasy he occasionally enjoyed in the dead of night.

"Hey, Charlie fuckin' Manson, fuck off back to California or I'll call the rozzers!" The local Scouser salute went down well. He'd heard it before. Most often when he stood up to address the cult meetings in his official role as treasurer and finance manager. All that and the trouble there had been since was in the past. That and the screaming of his ex-girlfriend as she trapped his duffle coat sleeve in the front door of the house the New Year's Eve she chucked him when he was too pissed to bother. Trapped by the coat sleeve in a locked front door, too drunk to explain, too confused to free himself, like a Canadian bear locked in a lumberjack's toilet. A situation destined to end badly for all concerned. But it never did end, it just revolved around in his head like a long playing record on a broken deck at 33rpm. It was as if these things had happened to other people and he'd just read them somewhere, but then again he wasn't much of a reader either.

Posted by impossible songs at 6:13 PM
Email ThisBlogThis!Share to TwitterShare to FacebookShare to Pinterest