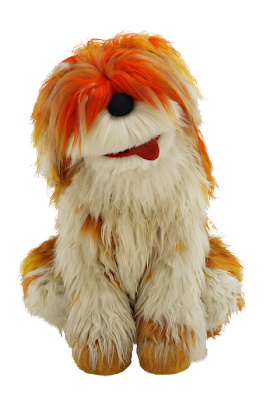 I've been wondering for a while if one of the local dogs we see every morning was in fact a small person in a dog suit, obviously acting like a dog and doing so in a reasonably authentic fashion. He or she is very convincing as an elderly husky lazing on somebody's driveway, a regular and well executed performance. So convincing that passing (genuine) dog walkers feed the beast with sausages. This led me to think about "fake" dogs and other beasts in the entertainment industry. Barkley from Sesame Street is probably the most famous (though the actor inside isn't). I wondered what real dog/animal actors made of a human getting a regular gig like that. I imagined Lassie, Hobo, Cheetah, Flipper, Mr Ed and Skippy all writing strongly worded letters of complaint via human lawyers about their status being undermined by so called "human animal actors".

It is a pretty clear case of cultural misappropriation I suppose and I'm doubtful if this type of animal rights matter is taken as seriously as it should be. Humans as animal actors is a more economical and simpler solution and they'll take direction a bit more easily but they will also talk back and complain etc. They do need good costumes so that's possibly a problem.

I've nothing against Barkley as such, I'm just thinking about those poor, unemployed animals out there and how their careers might be going. Please note I've avoided the rather difficult area of glove puppets, ventriloquist dummies and so on, oh, and pantomime horses and cows. Then there's the more complex issue of CGI ... and dinosaur rights.

Posted by impossible songs at 8:21 AM
Email ThisBlogThis!Share to TwitterShare to FacebookShare to Pinterest