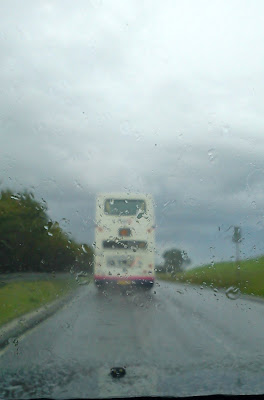 For some it is the strangest and most mystical bus journeys on this lonely planet, a run that takes you to the very edges of the known world, passengers are like characters spewed up from James Joyce or William Burroughs texts. Here on board time and distance don't really matter, the fare will always be exact and large open expanses of free seating will call out to you (except at peak times and on public holidays). I am of course describing the famed No43 bus that runs between our capital city and the silvery strip of water and sewage that separates Fife from the Lothians: Edinburgh to the 'Ferry.
We followed a "lost" 43 last night, a prime moving example, trapped in a thunderstorm, in the the dull afterglow of a lightning strike. We struggled to keep pace with the great angry beast as it rolled past hedgerows, dead seagulls and prospective sites and drill holes for the new Forth crossing like a beached Moby Dick. Alas we could not keep up with this rain soaked, Falkirk built apparition as it suddenly winked an amber light and turned left into oblivion - towards the town centre. We'll never know what became of it or the solitary unfortunate, screaming passenger, it seemed to be bound for a weird place called "SORRYNOTINSERVICE". 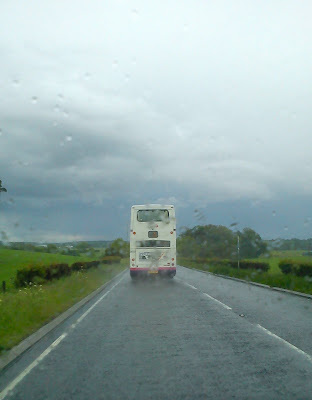 There she goes, looking for a "non-cut-in" bus stop in which to trap poor, unfortunate motorists and young cyclists with their LED flashing hats and wet legs. Some say the violent, rearward pointing spray is a toxic mix of cat urine, Barr's Tru-Lem and Ajax, some say it's all part of a complex and primeval mating ritual unknown to human kind. All I know is that it makes your Timberlands go a funny colour.
Posted by impossible songs at 7:06 PM
Email ThisBlogThis!Share to TwitterShare to FacebookShare to Pinterest