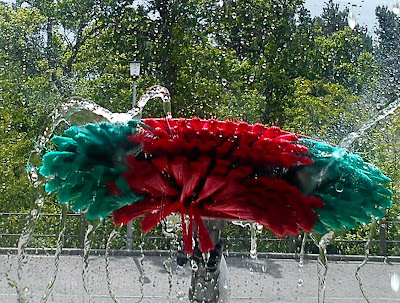 Irrelevant photo
Three girls waiting for their flight in Southampton Airport, they are dressed in similar but different black jump suits, well coloured hair and with lots of disorganised baggage. They are pretty but are not pretty enough to be in a girl band but they are acting like they are in one. The most blond girl strolls across to the duty free shop and comes swaggering back with a bottle of champagne. The girls all have used Costa drinks cups at the ready. After some giggling and screaming the bottle makes a loud pop, everybody looks around as the girls lash the drink into the cups, at that point their flight to Amsterdam is called. They seem indifferent to this information and lark about drinking the champagne (which must be unpleasantly warm having just come from the drinks rack in the shop), the flight is boarding a few feet away. One girl jumps up brandishing the half full bottle and slings it into a nearby waste bin. The other girls are still sloshing around with their drinks and don't seem to notice, then they decide perhaps they should board the flight but they cant find their passes. Then they realise that their bottle is missing, the guilty girl laughs, empties her cup and heads out onto the plane. The other two giggle, throw their cups in the bin and follow. The lady at the gate laughs and waves them on. Over in some nearby seats and Asian guy is talking in a very loud voice. "Taliban time" says a man sitting next to me. A young, uniformed soldier sits in a triangle with three young women, they are all strangers but he is talking to each one in turn. The girls' eyes are all alight as he flashes his attention between each one, telling a tale or making some observation. The conversations reach an unexpected peak and then fall away, they all return to their headphone worlds or magazine reads. The evening sun reflects on the curved girders of the roof and I look across to the hall, there are queues of people boarding flights to Guernsey and Jersey. Everybody seems to be over sixty, that's the pattern of travel for the Channel Islands perhaps.
Button money is everywhere, in button businesses, invested in button enterprises and returning button profits (sometimes making button losses) - we have a button economy.
Posted by impossible songs at 7:39 AM
Email ThisBlogThis!Share to TwitterShare to FacebookShare to Pinterest